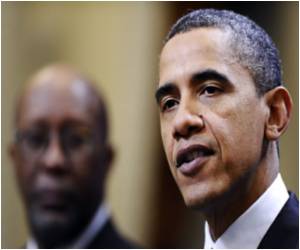 A new study found that people's bodily responses while watching presidential campaign ads, and discovered another way that people avoid political information and opinions that challenge their beliefs.

Barack Obama's vow to quell slash and burn politics, which helped sweep him to the presidency, is facing a decisive test in the angry echo-chamber imperiling his health reform drive.
Advertisement

In the last days of the 2008 campaign, researchers had people watch a variety of actual ads for Republican presidential candidate John McCain and his Democratic rival Barack Obama while the viewers' heart rates, skin conductance and activation of facial muscles were monitored.

A recent survey has found that Chinese social media users post less political messages and are happier compared to their western counterparts.
Advertisement
"If people are exposed to information in ads regarding a candidate they oppose, they respond by basically tuning out," Wang said.

"A lot of research has shown that, behaviorally, we tend to selectively expose ourselves to information that reinforces our existing opinions. But this study further suggests that even when exposed to information, our attention to what is presented is highly selective, as well," she said.

In comparison, people who didn't favor one candidate over the other showed similar physiological response patterns and intensity to ads for both Obama and McCain.

This suggested that partisan participants weren't really paying attention to the ads featuring the candidate they opposed even as they watched them, said Wang.

The study involved 15 college students who came to Wang's laboratory in October 2008. They were hooked up with electrodes that measured four physiological responses: heart rate, skin conductance (a way to measure sweating, which is related to how stimulated and alert the person is), and muscle movements around the cheekbone and around the eyebrows.

Research has shown that these physiological responses, taken together, indicate emotional responses and attention levels.

Libyan Women in Politics Too

Libyan women are so much more able than merely posing as appealing bodyguards or accessories to murder; they are plunging into politics aspiring to draft a constitution to protects their rights.
Advertisement
<< Global Warming can Intensify Tropical Rainfall: Reports
Bosses Increasingly Scared of Disciplining 'Lazy Staff' Ove... >>