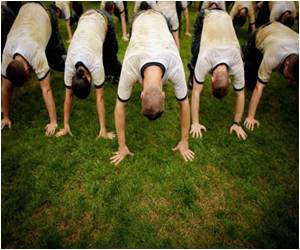 Exercise was found to improve cognition in children and older adults, reveals study.

University of Illinois psychology professor Art Kramer, a nationally recognized expert on the role of physical fitness on cognition, will discuss these brain-changing outcomes at a session of the 2013 meeting of the American Association for the Advancement of Science in Boston on Feb. 16. Kramer is the director of the Beckman Institute for Advanced Science and Technology at the U. of I.

"Populations throughout the industrialized world are becoming increasing sedentary as a result of the changing nature of work and leisure activities," Kramer said. "As a result of these societal changes, increases in diseases such as hypertension, diabetes, osteoporosis and some cancers are increasing. Physical activity serves to reduce susceptibility to these diseases."


"Increased physical activity also has direct, and relatively rapid effects on cognition and brain health," he said. "Such results have now been reported, over the course of several decades, in animal studies of physical activity."
Advertisement
Studies in humans, many conducted in Kramer's lab, also show that regular exercise, such as walking three times per week, also increases brain power.

Kramer will present research from his own lab and others that demonstrates that older adults who participate in fitness training and physical activity benefit from significant improvements in their brain structure and function. He will detail how scientists use both behavioral measures and non-invasive neuroimaging techniques such as magnetic resonance imaging (MRI), functional MRI, event-related brain potential, and event-related optical signals to assess cognition. He will conclude his presentation with a dissection of the gaps present in human and animal cognitive and brain health literature and describe how future research can remedy this.

Source: Eurekalert
Advertisement
<< Aamir Khan to Raise Awareness About Malnutrition
Bad Back? Blame It on Evolution >>