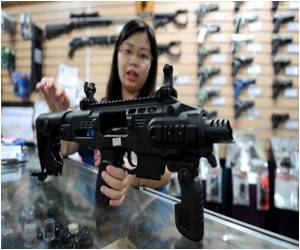 A government spokeswoman said that Philippine President Benigno Aquino has signed a law making it harder for private individuals to own firearms following a series of high-profile deaths this year.

Under the law signed last week, those seeking to buy firearms will have to undergo drug and psychological tests and should not have a criminal record or pending court cases.

They will also have to show proof of income as well as a valid tax return and secure clearance from their respective city or municipal police offices.


"The new law, coupled with strict enforcement and a more aggressive campaign against loose firearms, will help prevent untoward incidents involving firearms," deputy presidential spokeswoman Abigail Valte said.
Advertisement
Qualified citizens will only be allowed to own small firearms, and those who fail to renew their gun licence every two years will have their weapons confiscated by police.

Valte said the government was also stepping up its drive against illegal guns, with police going from door to door to check on potential sources of unlicensed weapons.

Gun ownership is a sensitive issue in the Philippines, where many own or carry firearms to protect themselves amid rampant criminality.

It was not clear how the law will help address the proliferation of unlicensed firearms or the thriving black market trade of these weapons.

A drug-crazed gunman also killed seven people in a slum rampage, and a shoot-out linked to a gambling turf-war left 13 dead, among them corrupt police and military officers.

Police data showed there were 1.2 million registered guns in the Philippines as of last year, with an estimated further 600,000 unlicensed firearms in circulation.

Philippines: New HIV Cases Hit Record High in April
The Department of Health (DOH) has confirmed that new cases of HIV infections in the Philippines ......

Philippines Health Department Warns Against E-cigarette Use
Saying the tobacco substitute could turn children into smokers, the Philippine health department ......