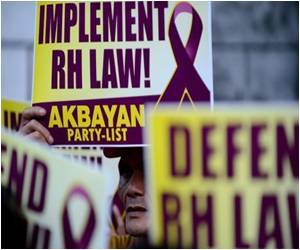 In a stunning defeat for the powerful Catholic Church, the Philippines' highest court approved a controversial birth control law that supporters said would transform the lives of millions of poor Filipinos.

"The RH law is not unconstitutional," Supreme Court spokesman Theodore Te told reporters, announcing a ruling that struck down more than a dozen petitions against the reproductive health law by church groups.

The law requires government health centres to hand out free condoms and birth control pills, as well as mandating that sex education be taught in schools.

The Catholic Church had until Tuesday led a successful campaign for more than 15 years against any form of family planning laws in the Philippines.

Oral contraceptive or birth control pills contain hormones that prevent pregnancy. It is one of the most reliable methods of contraception.
Advertisement
Philippine President Benigno Aquino defied church pressure and signed the law into effect in December 2012, but the Supreme Court quickly suspended it after church groups filed petitions arguing it was unconstitutional.

"This monumental decision upholds the separation of church and state and affirms the supremacy of government in secular concerns like health and socio-economic development," legislator Edcel Lagman, the principal author of the law, said immediately after the verdict.

"A grateful nation salutes the majority of justices for their favourable ruling promoting reproductive health and giving impetus to sustainable human development."

The Catholic Church, which counts over 80 percent of the country's 100 million population as members, had led street protests denouncing the law as "evil", and at one point in its opposition campaign threatened Aquino with excommunication.

One of its hardline opponents and a petitioner to the court, former senator Francisco Tatad, said allowing the law to take effect could force Catholics into an open revolt.

"This means civil disobedience at the very least, actual revolt at the most extreme," Tatad wrote in a commentary in the Manila Times newspaper on Tuesday.

"Some of us will want to defy the power of the devil and die as martyrs, if need be, in the only cause that gives us a chance to fight for something much bigger than ourselves."

Church leaders have helped lead two revolutions that toppled unpopular presidents in recent Philippine history, and they continue to insist they have a right to influence the parliamentary and legal branches of government.

Another example of its enduring influence is that the Philippines is the only country where divorce remains illegal.

Nevertheless, many people across the sprawling archipelago have embraced less conservative views in recent decades.

A recent survey carried by the respected Social Weather Stations polling group said about 84 percent of Filipinos agreed that the government should provide free family planning options such as contraceptives.

It said 72 percent were "in favour" of the law.

Women's rights groups and other supporters of the law say it will be a powerful tool in fighting poverty and cutting the birth rate of 3.54, one of the highest in the world.

More than a quarter of the population live on the equivalent of 62 cents a day, according to the government, and experts say there is an urgent need to provide free reproductive medical services that the poor can not otherwise afford.

More than a third of the capital's 14 million population live in sprawling slums, according to a 2010 World Health Organization report, and many of them do not have access to proper sanitation, let alone health centres.

According to the British medical charity Merlin, which has backed the passage of the law, 14-15 mothers die daily in the Philippines in complications related to child birth.

Single mother, Christina Bantasan, was wishing that a controversial birth control law had come earlier so she could have planned her future better, as she clutched her baby in the Philippine slum.
Advertisement
<< Marriages With Foreigners Regulated in South Korea
Common Treatment for Type 2 Diabetes Could Extend Hypoglyce... >>

Baldness can be Cured and Prevented: let us see How!
View all
News Archive
News Resource
Advertisement
News Category
Death Caused by a Rare Type Amoeba: Research Study Japan Approves Smallpox Vaccine for Monkeypox Did Human Evolution Shrink Your Brain? What to Do When Your Asthma Medication Doesn't Work? Which is Better to Improve Smoker's Health  Cigarettes or E-Cigarettes?
More News
Sign up for Wellness Consult a Doctor Sign up for Selfcare

Drug Side Effects Calculator The Essence of Yoga Vent Forte (Theophylline) Find a Doctor A-Z Drug Brands in India Drug - Food Interactions Calculate Ideal Weight for Infants Iron Intake Calculator Hearing Loss Calculator Drug Interaction Checker
This site uses cookies to deliver our services. By using our site, you acknowledge that you have read and understand our Cookie Policy, Privacy Policy, and our Terms of Use