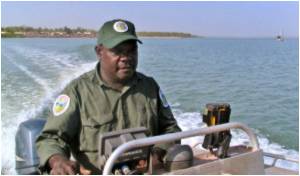 Two Philippine police gunboats catch up with an illegal fishing vessel after a short, intense chase and circle it like menacing sharks, their armed commandos poised to rappel onboard.

"Their first reaction is to flee, but they stop once they realise they cannot out-run us," boat captain John Rey Zumarraga told AFP during a training exercise in Honda Bay off the Philippines' most western island of Palawan.


Set up four years ago with funding from the US government, which also donated the gunboats and provided Navy SEAL training, the unit's mission is to patrol the near-2,000-kilometre (1,243-mile) coast of the strategically located province.
Advertisement
Combating human trafficking is one part of its mission, but most of its time and resources is spent on trying to stop poaching of rare fish and other endangered wildlife in and around Palawan, which lies astride the South China Sea.

"Without those (gunboats) the poachers would be laughing at us," said the unit's chief administrative officer, Inspector Bryan Espinosa.

But the unit has an Achilles heel, or two: with just six boats and a tiny fuel budget from an under-funded police force, it cannot come close to adequately patrolling the waters around Palawan and into the South China Sea.

"The area is too vast to be patrolled," Espinosa conceded.

Nevertheless, the boat unit has been involved in the arrests of hundreds of fishermen, many of them foreigners, and busts involving Chinese and Vietnamese crews have sent diplomatic shockwaves across the South China Sea.

Most recently, the unit last month arrested 9 Chinese fishermen in hotly contested South China Sea waters off Palawan and seized their boat, which police said contained hundreds of endangered hawksbill sea turtles, many of them dead.

Most of the unit's work is restricted to just off the coast of Palawan, which is indisputably Philippine territory.

However the Chinese bust occurred more than 100 kilometres (60 miles) off Palawan in a part of the South China Sea that the Philippines insists it has sovereign rights over but is also claimed by China, Vietnam, Malaysia, Brunei and Taiwan.

The arrests fuelled a decades-long but increasingly bitter row between the Philippines and China over their competing claims to parts of the sea, and the Chinese government demanded the fishermen be immediately released.

China insists it has sovereign rights to nearly all of the South China Sea, including waters more than 1,000 kilometres from its most southern major landmass and just 40 or 50 kilometres from Palawan.

The Philippine government has held its ground in the case, maintaining the fishermen must be brought to justice for harvesting a rare and protected species, a crime that carries a maximum penalty of 20 years in jail.

The crew of the Chinese boat have appeared in court at Puerto Princesa, the capital of Palawan, for initial proceedings in what is expected to be a lengthy judicial process. They have pleaded not guilty.

They are in the provincial jail with dozens of Vietnamese arrested near Palawan's most southern tip in waters that indisputably belong to the Philippines.

Twelve of those fishermen offered last week to switch to guilty pleas and pay fines in exchange for their immediate release.

The court did not give an immediate decision but chief Palawan state prosecutor Alen Rodriguez said plea bargains were common.

"Bringing about convictions is quite easy, especially as they often resort to plea bargains," Rodriguez told AFP.

In 2011, the boat unit was also involved in a joint operation with the military that led to the arrest of 122 Vietnamese, the biggest illegal fishing bust in recent memory. They served jail terms of about six months, then were sent home.

But in recent decades, competition for increasingly scarce fish stocks has heightened as populations in Asian nations have boomed, forcing fishermen to travel further from home and closer to foreign coasts for their hauls.

"They know fully well that they are fishing beyond their territorial waters. Their vessels are equipped with GPS (global positioning system)," said the boat unit's spokesman, Inspector Raymond Abella.

- Boat unit grows, but not enough -

The unit is expanding, with a new station being built near Malaysia and another one planned for the sea border with Indonesia.

However Abella conceded this still would not be nearly enough to counter the growing problem of foreign fishing incursions.

"We know it remains rampant," he said.

"Palawan has a lot of resources that are no longer available where they come from, and it is relatively easy to get them. They know that policing here is not as strict, that's why they continue to come here."

Meanwhile, there are no police gunboats to patrol the rest of the country's coastline, the fourth longest in the world.

The safeguarding of marine resources along the rest of the Philippines' coastline is left to the poorly equipped navy and coastguard, which is generally preoccupied with other duties.

Bangladesh's Otter Fishing Tradition on the Verge of Extinction
The excited cries of two otters can be heard as they swim around a fishing boat in a river in ......

Powerful Artificial Muscles Created With the Help of Fishing Lines
An international group of experts revealed that they have managed to create inexpensive artificial ....

Researchers Are 'Fishing' for Memories
We constantly refer to past experiences stored as memories to guide behavioral decisions in our ......

Have You Heard of Fishing Therapy?
Two Scottish hospitals have begun using fishing as a form of therapy to bring immense benefit to ......