Philippine Dengue Outbreak Linked to Pools of the Rich 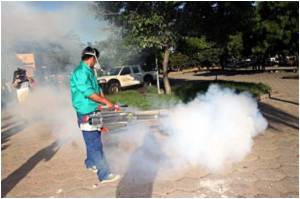 Health authorities have said that swimming pools in the Philippines' richest neighbourhoods could be partially to blame after tens of thousands of people were struck down in a dengue fever outbreak.

Caused by a mosquito-borne virus that inflicts an influenza-like illness, dengue is an annual scourge during the country's wet season, with residents of Manila's slums usually comprising many of those affected.


However health authorities at the Manila suburb of Muntinlupa suspect that the carrier mosquitoes could be breeding at swimming pools in Ayala Alabang, home to some of the wealthiest Filipinos, said surveillance chief Romeo Javier.


"These mosquitoes don't make a distinction between rich or poor," Javier told AFP, adding that dengue cases have also been reported even in the affluent enclave.

"It's one angle we are looking into," he added.

The leafy, gated community of Ayala Alabang sprawls over nearly 700 hectares (1,729 acres) of southern Manila. The area's housing association could not be reached for comment Friday.

The Philippine Daily Inquirer newspaper quoted an official as saying they are checking the untended pools of houses of deceased owners or properties that have been foreclosed by banks.

June Corpuz, a staff member at the health ministry's National Epidemiology Centre, told AFP it was plausible that the mosquito species that spreads the virus could be breeding in swimming pools found in the homes of the rich.

"They can lay eggs in any type of clear water," she told AFP.

She said the ministry had monitored 84,023 cases of dengue up to September 11, already double the cases for 2009.

The disease can lead to a potentially deadly complication called dengue haemorrhagic fever.

The health ministry said this year's death toll has topped 500, compared to 369 for the whole of last year.

The World Health Organization said dengue incidence has risen dramatically around the world in recent decades, with two-fifths of the global population at risk.

Southeast Asia and the Western Pacific are considered the most seriously affected, it said on its website.