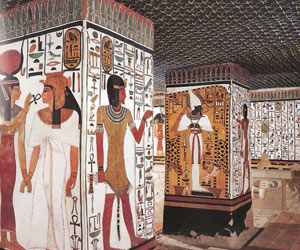 Joint team of Egyptian and French archaeologists discover the Tomb of an Ancient Egypt's Ramesside Period in Luxor.

"Research is continuing to determine the name of the pharaoh she was married to," a statement said.


Inside the tomb, archaeologists found fragments from 20 funerary statues on which was inscribed the name "Karomama", which may help narrow the search.

Finding this vital clue "will help establish more about this important person", the ministry said.

Luxor, a city of half a million on the banks of the River Nile in the south, is an open-air museum of temples and tombs from ancient Egypt.

Source: AFP
Advertisement
<< The Tale of Bone-Eating Worms: Mysteries from the Sea
TRPA1 Gene Could Help in the Treatment of Frostbite and Hyp... >>