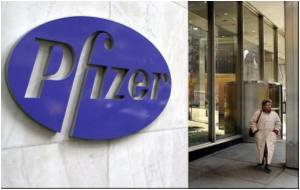 Pfizer's patent on the best-selling cholesterol-lowering drug of all-time, Lipitor, expired on Wednesday, opening the market for generic competitors for America's most popular medication.

Lipitor came on the market in 1997, and has raked in some $100 billion for Pfizer even in a crowded market that includes various other cholesterol-lowering statins, many of which have already gone generic.

In the United States, anti-cholesterol drugs account for 255 million prescriptions a year, and about nine million people are taking Lipitor.


US-based Watson Pharmaceuticals immediately announced its launch of a generic version of Lipitor, atorvastatin calcium, under an exclusive supply and distribution agreement with Pfizer, whereby Pfizer manufactures the drug and Watson sells it, sharing net sales with Pfizer until 2016.

The BMI calculator helps you assess your weight indicating if it is normal or if you are underweight or overweight, based on your height.
Advertisement
Indian-based Ranbaxy, which was also expected to release its generic in the next six months, still awaits the green light from US authorities due to delays over problems with quality control and some of their Indian factories.

"There should be a price war in that first six months," said Morningstar analyst Damien Conover.

As companies elbow for market share of the cheaper generic version of Lipitor, Pfizer is left hunting for new sources of revenue to replace the cash flow from its longtime star, which made up 15 percent of Pfizer's annual sales.

Lipitor global sales were over $10 billion last year. Conover estimated a sales figure of $3.8 billion in 2012.

Use Medindia's Cholesterol Level Counter to know the amount of cholesterol in a specific food item, based on which you can count how much of cholesterol you consume everyday.
Advertisement
<< Common Chemicals Linked to Parkinson's Disease Risk
AIDS Response Promising, But Cash Crunch in AIDS Funding Wor... >>

Find a Hospital Find a Doctor Drug Interaction Checker Diaphragmatic Hernia Indian Medical Journals Noscaphene (Noscapine) Post-Nasal Drip Nutam (400mg) (Piracetam) Loram (2 mg) (Lorazepam) Accident and Trauma Care
This site uses cookies to deliver our services.By using our site, you acknowledge that you have read and understand our Cookie Policy, Privacy Policy, and our Terms of Use  Ok, Got it. Close
×