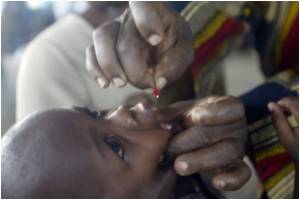 A Nigerian court has ruled barring US firm Pfizer from conducting DNA tests to determine compensation related to children who died or were deformed during a drug trial, court papers showed on Wednesday.

The temporary order was in response to a case filed by lawyers of families of 192 victims of the drug test who want a halt to the DNA tests that are needed for identification of victims and relatives.

The High Court in a ruling handed down in the Nigerian capital Abuja on Monday, granted an interim order barring Pfizer from "continuing to conduct any tests ... particularly DNA tests on any of the applicants," it said.


An out-of-court settlement over the 1996 meningitis drug trial that allegedly left 11 children dead and 189 others deformed was reached last year, but the families' lawyers now want the identification exercise and payouts to cease.

Meninges are the three layers of membrane that cover the brain and infection of the cerebrospinal fluid between them causes meningitis the disease of the meninges.
Advertisement
They accuse Pfizer of unfairness for insisting on conducting DNA tests on victims and their families for identification purposes without independent verification.

The families' lawyers earlier this month wrote to a special board appointed by the US pharmaceutical giant and the Kano state government to manage the payout fund, rejecting the 35-million-dollar compensation.

It charged that Pfizer carried out an illegal trial of a meningitis drug, Trovan Floxacin, on 200 children in 1996 during a triple epidemic of meningitis, measles and cholera in which over 12,000 people died.

Pfizer denied any wrongdoing, insisting that the trial was conducted with the consent of the Nigerian government and conformed to ethical guidelines.

After two years of legal wrangling, Pfizer and Kano reached a 75-million-dollar settlement which included 35 million dollars in compensation to the victims. Families of 192 children had sought compensation.

Indian Medical Journals Pregnancy Confirmation Calculator Hearing Loss Calculator Loram (2 mg) (Lorazepam) Sinopril (2mg) (Lacidipine) Blood Pressure Calculator Noscaphene (Noscapine) Accident and Trauma Care The Essence of Yoga Diaphragmatic Hernia
This site uses cookies to deliver our services. By using our site, you acknowledge that you have read and understand our Cookie Policy, Privacy Policy, and our Terms of Use