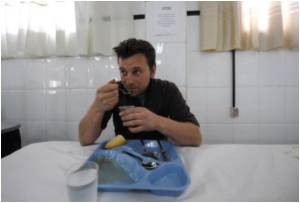 People with pets seem to have the filthiest kitchen floors, a new study has revealed.

A house with a dog or a cat will typically have bacteria levels almost 20 times higher than the ones without.

When It Comes to Bacterial Exposure, Your Toilet Seat May Be a Better Dining Spot Than the Kitchen

Having lunch off a toilet seat is safer than a typical office desk, according to an American microbiologist.
Advertisement

Surprisingly, having children in a house- makes only a negligible difference.

A new survey published in a nursing magazine has revealed a desperate need for extra hospital beds
Advertisement
"Over a whole kitchen floor of average size this would equate to roughly six million bacteria. The levels of bacteria after one week were higher than those you would find on average on pub ­toilet seats." the Daily Express quoted Dr Alan Edmondson as saying.

Bacteria levels in homes with pets were even higher than for a student house.

"This was especially marked in the cases of the married couple with children and pets, where there was a 10,000-fold ­reduction in bacterial contamination after using a clean mop," added Edmondson.

Pets Could be Harmed by Easter Treats