Pet Therapy to Cheer Up Kids 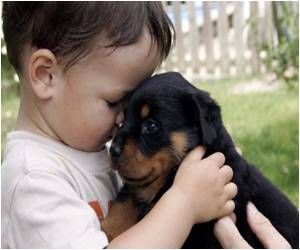 A children's hospital in the Tennessee state launches a new pet therapy to cheer up kids.

Pets have long been known to improve mood and lower stress levels. A recent study has underlined the therapeutic value of developing a bond with pets.
Advertisement

The boy, who lost a toe in an accident recently, stroked the golden retriever as part of "doctor's orders".


The treatment, more commonly known as AAT - animal-assisted therapy - has been used to treat patients with mental and physical health problems since the late 18th century.

People and their pets often end up resembling each other, but image-obsessed Americans are taking that age-old relationship a step further.
Advertisement
A 2010 study published in the US Early Childhood Education Journal showed that children in particular benefit from AAT.

Staff at the hospital said pet therapy has resulted in a better outcome for patients.

The programme has been going on for two weeks and it is the first time animals have been allowed in the intensive care unit.

"We all stop and pet them. Grandparents do. Physicians do. Family members and siblings. I think there is something disarming about seeing a dog in a hospital. It makes you stop your 'busyness' - to take a minute and pet a dog," she said.

A dog-lover has come out with a novel way to feed his pet by sending him a Twitter message.
Advertisement
<< New Gene Probably Aids Bacteria To Survive Extreme Environs
Fresh Model of Disease Contagion Ranks U.S. Airports Regardi... >>

More News on:
Height and Weight-Kids Reiki and Pranic Healing