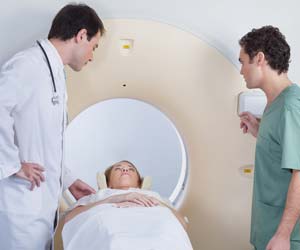 Research presented at the Society of Nuclear Medicine and Molecular Imaging's 2019 Annual Meeting draws a strong link between severe obstructive sleep apnea (OSA) and impaired coronary flow reserve, which is an early sign of the heart disease atherosclerosis.


Obstructive sleep apnea occurs when a person's airway is blocked while sleeping, which causes intermittent pauses in breathing. According to the American Sleep Apnea Association, an estimated 22 million Americans suffer from sleep apnea, which is increasingly recognized as a cardiovascular disease risk factor. Left untreated, OSA can lead to high blood pressure, stroke, chronic heart failure and other cardiovascular problems.

Computed Tomography (CT) scan is a type of medical examination that uses X-rays and computer processing to create sectional images of the body to provide more efficient results than X-rays.
Advertisement
To evaluate the cardiovascular disease risk factors in OSA patients, researchers conducted 13N-ammonia PET/CT imaging on 38 patients, who were divided into three groups based on the severity of their sleep apnea. During the PET/CT imaging, myocardial blood flow and coronary flow reserve--key indicators of coronary dysfunction--were automatically calculated using quantitative PET/CT software.

The mean rest myocardial blood flow was similar among patients in the three groups of mild, moderate and severe OSA. The mean hyperemic myocardial blood flow was also similar, though researchers found that the blood flow decreased gradually as the severity of OSA increased. There were, however, significant differences in the mean coronary flow reserve among the three groups--those with severe OSA had a substantially lower coronary flow reserve.

"As we all know, impaired coronary flow reserve is an early sign of atherosclerosis," said Ruonan Wang, MD, The First Hospital of Shanxi Medical University in Taiyuan, China. "Our study suggests that patients with OSA, especially severe OSA, should receive PET myocardial perfusion imaging as early as possible to exclude coronary microcirculatory dysfunction."

Obstructive sleep apnea should be suspected in overweight middle aged adults who snore loudly and which can cause interruption of breathing for 10 seconds or more and this results in reduced blood o
Advertisement
<< Veterans with PTSD Twice Likely to Die from Suicide, Acciden...
Novel Way can Boost Vitamin D Content of Egg to Counter the ... >>

An implantable device called the Remedē system is the new treatment option for patients with central sleep apnea.