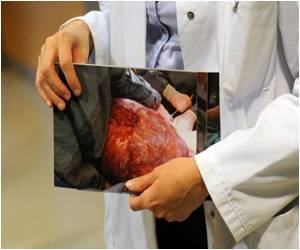 A type of deadly brain cancer could be sought out and attacked by specially engineered immune cells and they were found to be safe and effective at controlling tumor growth in mice. The mice were treated with these modified cells, revealed a study published in Science Translational Medicine by a team from the Perelman School of Medicine at the University of Pennsylvania and the Novartis Institutes for BioMedical Research. The results paved the way for a newly opened clinical trial for glioblastoma patients at Penn.

"A series of Penn trials that began in 2010 have found that engineered T cells have an effect in treating some blood cancers, but expanding this approach into solid tumors has posed challenges," said the study's senior author, Marcela Maus, MD, PhD, an assistant professor of Hematology/Oncology in Penn's Abramson Cancer Center. "A challenging aspect of applying engineered T cell technology is finding the best targets that are found on tumors but not normal tissues. This is the key to making this kind of T cell therapy both effective and safe."


The new preclinical study, conducted in collaboration with Hideho Okada, MD, PhD and his colleagues at the University of Pittsburgh, details the design and use of T cells engineered to express a chimeric antigen receptor (CAR) that targets a mutation in the epidermal growth factor receptor protein called EGFRvIII, which is found on about 30 percent of glioblastoma patients' tumor cells. More than 22,000 Americans are diagnosed with glioblastoma each year. Patients whose tumors express the EGFRvIII mutation tend to have more aggressive glioblastomas. Their tumors are less likely to respond favorably to standard therapies and more likely to recur following those treatments.


"Patients with this type of brain cancer have a very poor prognosis. Many survive less than 18 months following their diagnosis," said M. Sean Grady, MD, the Charles Harrison Frazier Professor and chair of the department of Neurosurgery. "We've brought together experts in an array of fields to develop an innovative personalized immunotherapy for certain brain cancers."

The new trial is led by Donald M. O'Rourke, MD, an associate professor of Neurosurgery, who oversees an interdisciplinary collaboration of neurosurgeons, neuro-oncologists, neuropathologists, immunologists, and transfusion medicine experts.

Maus describes the genesis of the new results as a "tour de force," in terms of the range of experiments performed to characterize the EGFRvIII CAR T cell. First, the team developed and tested multiple antibodies, or what immunologists call single-chain variable fragments (scFv), which bind to cells expressing EGFRvIII on their surface. The scFvs recognizing the mutated EGFRvIII protein must be rigorously tested to confirm that they do not also bind to normal, non-mutated EGFR proteins, which are widely expressed on cells in the human body.

The researchers then generated a panel of humanized scFvs and tested their specificity and function in CAR modified T cells. (Humanized scFvs are molecularly changed from their origins in non-human species to increase their similarity to human antibodies.) Out of the panel of humanized scFvs that were tested, the researchers selected one scFv to explore further based on its binding selectivity for EGFRvIII over normal non-mutated EGFR. They also evaluated the EGFRvIII CAR T cells in an assay utilizing normal EGFR-expressing skin cells in mice grafted with human skin. They found that the engineered EGFRvIII CAR T cells did not attack cells with normal EGFR in this model.

On the basis of these preclinical results, the investigators designed a phase 1 clinical study of CAR T cells transduced with humanized scFv directed to EGFRvIII for both newly diagnosed and recurrent glioblastoma patients carrying the EGFRvIII mutation. "There are unique aspects about the immune system that we're now able to utilize to study a completely new type of therapy," said O'Rourke.

The investigational approach begins when some of each patient's T cells are removed via an apheresis process similar to dialysis, the cells are engineered using a viral vector that programs them to find cancer cells that express EGFRvIII. Then, the patient's own engineered cells are infused back into their body, where a signaling domain built into the CAR promotes proliferation of these "hunter" T-cells. In contrast to certain T cell therapies that also target some healthy cells, EGFRvIII is believed to be found only on tumor tissue, which the study's leaders hope will minimize side effects.

The clinical trial is sponsored by Novartis. In 2012, the University of Pennsylvania and Novartis announced an exclusive global research and licensing agreement to further study and commercialize novel cellular immunotherapies using CAR technologies. The STM study is the first pre-clinical paper developed within the Penn-Novartis alliance, with Penn and Novartis scientists working collaboratively. Ongoing clinical trials evaluating a different type of Penn-developed CAR therapy known as CTL019 have yielded promising results among some patients with certain blood cancers. In July 2014, the FDA granted CTL019 its Breakthrough Therapy designation for the treatment of relapsed and refractory acute lymphoblastic leukemia in both children and adults. For more information about the glioblastoma trial, visit clinicaltrials.gov.

This STM study was supported by funding from the National Institutes of Health (DP2CA174502), the National Cancer Institute (K08-166039), an American Society of Clinical Oncology Conquer Cancer Foundation Young Investigator Award, and the Novartis Institutes for BioMedical Research as part of an alliance with the University of Pennsylvania.

Editor's Note: Some of the scientists at the University of Pennsylvania and Novartis are inventors of these technologies, and the University as well as the inventors may benefit financially from this work in the future.

Glioma Brain Tumor
Democrat Senator Edward Kennedy has been diagnosed with Glioma, a kind of brain tumor. Tests carried out on the 76 -year old politician revealed a tumor on his left parietal lobe.
READ MORE

Facts on Brain Tumor
A brain tumor is a collection of damaged cells that multiply without control within the brain. Read Medindia's facts on brain tumor.
READ MORE