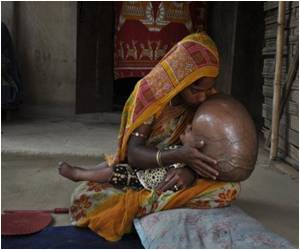 Life-saving surgery has been successfully carried on an Indian baby suffering from a rare disorder that caused her head to swell to nearly double its size, says neurosurgeon.

"The surgery went perfectly, much better than expected," said Sandeep Vaishya after the procedure on 15-month-old Roona Begum.

"It's definitely a success but it's too early to say what the quality of her future life will be like," Vaishya added, speaking exclusively to an AFP reporter inside the operating theatre at a hospital in New Delhi.

Scientists Discover Clue to Cause of Childhood Hydrocephalus
Scientists have found what may be a major cause of congenital hydrocephalus, one of the most common ...

Farm Animals in Uganda Might Cause Infant Hydrocephalus
An international team of researchers from Uganda and the United States say that hydrocephalus in ......

Doctor Says Indian Baby With Swollen Head Doing Well
The Indian girl whose head was swollen to nearly double its normal size is doing well, but the ......