Peptide Discovered help faster Absorption of Medicines in the intestine 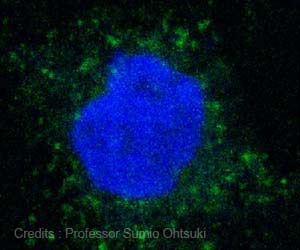 A new permeable peptide has been identified in the small intestine, which can help in absorption of biopharmaceutical products (like drugs) in the digestive tract, reveals a new study Kumamoto University, Japan.

Biopharmaceuticals, medium- and high-molecular weight biologically active macromolecules, are not easily absorbed by the small intestine, the main organ responsible for gastrointestinal absorption, resulting in a bottleneck for oral administration type biopharmaceutical development.

Advertisement
‘A peptide discovered aids in faster absorption of medicines in the intestine. Biopharmaceutical products can now be orally administered.’

The discovery is expected to contribute greatly to the development of orally administered drugs for various medications that are currently only available by injection, including widely used biopharmaceuticals such as insulin.


Orally administered medicines are among the most convenient and safest types of medications. Many drugs currently on the market are low molecular weight compounds that can be absorbed by the small intestine.
Advertisement
Bio-medicines such as insulin, antibodies, and nucleic acids have attracted attention in recent years but are almost completely unabsorbed in the small intestine because they are macromolecular compounds with large constituent molecular weights. Therefore, there are currently no oral formulations for these biopharmaceuticals so they are administered through injections, which are physically and mentally burdensome to the patient.

Cell-penetrating peptides (CPPs) are peptides that facilitate the delivery of various molecules with low cell membrane permeability, such as proteins or nucleic acids, through the cell membrane. It is therefore attracting attention as a method to facilitate small intestine absorption (penetration) of polymer drugs. However, when using existing CPPs to bind to biopharmaceuticals, the effect on intestinal absorption improvement is small.

Kumamoto University researchers thought that even though existing CPPs facilitate the transport from the gastrointestinal tract into small intestinal epithelial cells, transportation from inside the cells to the blood is not well facilitated. Therefore, they searched for "small intestinal permeable peptides" to improve biopharmaceuticals absorption in the digestive tract.

Viruses called phages are widely used to search for peptides with specific functions. From a phage library presenting cyclic peptides of various (1 x 109) amino acid sequences, researchers gathered phages that permeated across the Caco-2 cell layer. They then analyzed the phage peptides that permeated the cell since Caco-2 cells are widely used as a human small intestine absorption model.

Three new cyclic peptides were identified as a result of the analysis. These cyclic peptides facilitated the absorption of phages in Caco-2 cells and in mouse small intestines. An analysis of this cyclic peptide found that it is transferred into the cell through macropinocytosis, a mechanism utilized for incorporating large, extracellular substances into the cell.

"The goal of our research was to enable the oral administration of medicines with large molecular weights. These medications are readily not absorbed by the small intestine and are typically administered through injection. We have cleared this hurdle by binding new intestine-permeable cyclic peptides to biopharmaceuticals," said Professor Sumio Ohtsuki of Kumamoto University's Department of Pharmaceutical Microbiology.

"We expect that our developments will lead to improved patient QOL."

This finding was posted online in the "Journal of Controlled Release".

Doctor Operates Upon the Small Intestine Instead of the Fallopian Tube in a 22-year-old
A 22-year-old woman who underwent a tubectomy at a government hospital in Odisha is battling for ......