People Living Near Livestock At Higher Risk of Acquiring MRSA 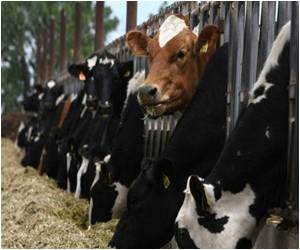 Living near livestock may raise your risk of contracting Methicillin-resistant Staphylococcus Aureus (MRSA), according to a new study.

People who live near livestock or in livestock farming communities may be at greater risk of acquiring, Methicillin-resistant Staphylococcus Aureus (MRSA), according to a new study led by an international team of researchers from the Johns Hopkins Bloomberg School of Public Health, the Dutch Institute for Public Health and the Environment (RIVM) and VU University Medical Center in Amsterdam.

A comparison of livestock density, place of residence and existing information on risk factors found that regional density of livestock is an important risk factor for nasal carriage of livestock-associated (LA) MRSA for persons with and without direct contact with livestock. The results are featured in the November issue of Emerging Infectious Diseases.


Staphylococcus aureus is a pathogen that can cause a range of illnesses in humans, from minor to life-threatening skin, bloodstream, respiratory, urinary and surgical site infections. According to the Centers for Disease Control and Prevention, MRSA is a type of staph bacteria that is resistant to penicillin and certain first-line antibiotics called beta-lactams. MRSA infections are most commonly infections of the skin. Though nasal carriage, the indicator under study in this research, does not indicate that someone is infected with MRSA, it is associated with increased risks of eventual infection. Moreover, in this study it is a measure of exposure to MRSA. "In the past, MRSA has been largely associated with hospitals and other health care facilities, but in the last decade the majority of infections have been acquired in the community outside of a health care setting," said Ellen Silbergeld, PhD, co-author of the study and a professor with the Bloomberg School of Public Health''s Department of Environmental Health Sciences.

Vitamin B3 Could be Useful in Fighting Off MRSA

Vitamin B3 can provide a massive boost to the immune system against antibiotic-resistant staph infections.
Advertisement
This study is the first to suggest the importance of indirect routes of transmission of livestock-associated MRSA. Jan Kluytmans, MD, PhD, co-author of the study and professor of Medical Microbiology and Infection Control, VU University Medical Center Amsterdam and Amphia Hospital Breda, the Netherlands, said, "In the Netherlands LA-MRSA was first found in 2003 and was initially almost exclusively found in persons with direct contact to livestock. In recent years LA-MRSA is found with increasing frequency in community-dwelling individuals with no known contact with livestock. It is important to determine the routes of transmission outside of the farms since this may have important consequences for public health."

"Using logistic regression, we found that as the density of veal calves, pigs, or cattle doubles in a specific area, the odds of carrying LA-MRSA increases between 24 percent and 77 percent, depending on the animal. These results challenge us to understand how these exposures could be occurring," said Beth Feingold, PhD, MPH, MESc, lead author of the study, Bloomberg School of Public Health graduate and the Glenadore and Howard L. Pim Postdoctoral Fellow in Global Change at the Johns Hopkins Zanvyl Krieger School of Arts and Sciences. "This work has potential policy implications for MRSA surveillance in countries with a substantial percentage of total MRSA cases being livestock-associated MRSA. Controlling the spread of livestock-associated MRSA requires attention to community members in animal-dense regions who are otherwise unaffiliated with livestock farming."

Using existing data on non-typable or livestock-associated MRSA carriage from the Netherlands, as well as country-wide statistics on livestock and population densities, the team of U.S. and Dutch researchers examined how regional-level factors played into an individual''s risk, after accounting for their personal risk factors such as their direct contact with animals, whether they lived in a rural or urban locale, and in what situation they likely acquired MRSA. Using geographic information systems, the researchers geocoded livestock-associated MRSA cases and other types of MRSA controls by postal codes. They used the geographic information to examine spatial patterns of livestock-associated MRSA compared to other types of MRSA. Researchers found that the odds of LA-MRSA as compared to other types of MRSA are highest in the Southeast region of the country, a major livestock production area of the Netherlands.

The authors conclude that the study may also have serious implications for individuals living in the U.S. due to the sheer volume of pig farms in this country. "Swine production is a significant industry in the Netherlands, but its density and scale are much less than in the United States. Future work should investigate the relationship between intensive livestock operations in the US and exposures to drug-resistant microbes including MRSA," said Ellen Silbergeld.

The research was funded by the Johns Hopkins Center for a Livable Future and the Pew Charitable Trusts.