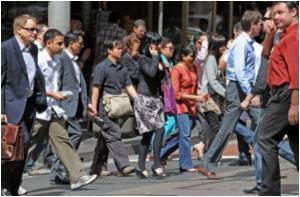 People living in the north of England are 20% more likely to die before they reach 75 than those in the south, finds a study published on bmj.com today.

An accompanying editorial says the north-south health divide is now at its widest for 40 years and warns that "the north is being decimated at the rate of a major city every decade."

Calculate how many more seconds have you got to live. An interesting reminder for us to live these precious moments happily.
Advertisement

The north-south health divide in England is well documented and has posed a public health challenge - as well as a political and economic challenge - to successive governments. From 2003 to 2010, the UK government had performance targets for reducing geographical inequalities in health, but there has been little research of time trends in this divide.


So, researchers at the University of Manchester and Manchester City Council set out to compare death rates between the north and south of England over four decades. They analysed deaths and population data for all residents each year from 1965 to 2008 from the five northernmost and four southernmost English regions.

The dynamic clock calculates the number of people who are dying in the world every second. On an average there are 56 million deaths that take place in a year.
Advertisement
Their results show that overall rates of premature death have been 14% higher in the north over the four decades. This inequality was larger for men (15%) than for women (13%).

The north experienced a fifth more premature (under age 75) deaths than the south, and this figure changed little between 1965 and 2008.

This north-south divide decreased significantly but temporarily for both sexes from the early 80s to the late 90s, followed by a steep rise from 2000 to 2008, despite government initiatives to reduce health inequalities over this period.

The large north-south divide has persisted despite the fact that overall mortality in England has greatly reduced since 1965 - by about 50% for men and about 40% for women with north and south both experiencing similar reductions.

"These findings point towards a severe, long-term and recently worsening structural health problem in the geography of England, which may not have received the attention it requires from government policy and which has been resistant to specific policies to reduce inequalities in health or regenerate local communities," said Professor Iain Buchan from the University of Manchester School of Community Based Medicine and Mr John Hacking from Manchester City Council's Joint Health Unit.

"More research is needed into: why policies to reduce such inequalities have failed; how the wider determinants of health may be unbalanced between north and south; and what role selective migration plays."

In an editorial also published today, Margaret Whitehead, Professor of Public Health at the University of Liverpool, and Tim Doran, Clinical Research Fellow at the University of Manchester warn that future prospects look grim. They argue that deprived northern communities have "borne the brunt" of the current recession and that government spending cuts "will also hit hardest in the north."

They believe that the NHS must do more than pick up the pieces and call for "a national overview" of access to NHS services for different sections of the population living in different parts of the country. "Otherwise, the result could be chaos and an even wider health divide."

Drug Side Effects Calculator The Essence of Yoga Blood Donation - Recipients How to Reduce School Bag Weight - Simple Tips Pregnancy Confirmation Calculator A-Z Drug Brands in India Find a Doctor Nutam (400mg) (Piracetam) Vent Forte (Theophylline) Diaphragmatic Hernia
This site uses cookies to deliver our services. By using our site, you acknowledge that you have read and understand our Cookie Policy, Privacy Policy, and our Terms of Use