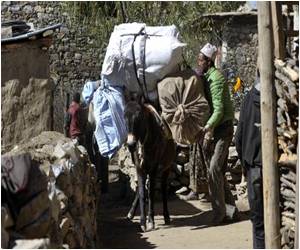 On a highway winding towards Kathmandu in Nepal, there is a mad scramble to get relief material from a vehicle parked on the roadside here. Some have walked for a day to reach the spot and it is a long way back home.

More than a week after the devastating temblor in Nepal, the roads and highways are seeing several vehicles with either relief material or other commodities.

Durbar Square in Kathmandu, Quite a Tourist Hub

On the highway towards Kathmandu, some 85-km away, stands a group of youngsters, women and kids, surrounding a lorry loaded with relief material for them.


There is a rush to gather relief material that has come from Japan and the Nepal Red Cross.

Hundreds of gays, lesbians and transsexuals braved monsoon rains to hold a gay pride parade in the Nepalese capital on Wednesday, led by South Asia's only openly homosexual lawmaker.
Advertisement
Hailing from a hamlet of 840 houses, they say they have walked for a day to come to get relief. It is already dusk and walking back home would take longer.

Yuvraj Roli, a young man, said that so far there has been no official visit to their village and no government help but for the one that has come from Red Cross and NGO Shapla Neer; Japan and Rural Reconstruction Nepal (RRN).

Some 500 houses, he said, have collapsed, leaving eight dead in their village.

Teenager Jhalan Gurung said the village is devastated and will take "several years to recover".

Raj Shrestha, from the Nepal Red Cross, who is assisting in the relief, said that they had that day distributed the material at Daraji Chowk where 150 food packets and medicine worth Nepali Rs.3 lakhs were given away.

Rabindra Singh of the RRN apart from their own material, they had also distributed things sent by a doctor from India's Varanasi city.

As the villagers begin their trek back home, and the relief distributing team sets move to another village, everyone realizes that the journey ahead would be quite challenging, long and arduous.

A 59-member Chinese medical team reach Kathmandu as the Nepalese side of the Chinese border faces serious disease prevention challenges after the earthquake.
Advertisement
Advertisement
This site uses cookies to deliver our services.By using our site, you acknowledge that you have read and understand our Cookie Policy, Privacy Policy, and our Terms of Use  Ok, Got it. Close
×