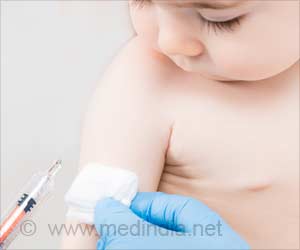 Pentavalent vaccine (PV) was found to double the deaths of children soon after vaccination when compared to the DPT (Diphtheria-Pertussis-Tetanus) vaccine, reveals a new study.

Pentavalent vaccine (PV) was introduced by India six years ago, according to a new study that calls for a "rigorous review of the deaths following vaccination with PV".

Advertisement
‘Pentavalent vaccine (PV), a combination of DPT vaccine and two other vaccines against Haemophilus influenza type B (Hib) and Hepatitis B.’

Government records show that there were 10,612 deaths following vaccination (both PV and DPT) in the last 10 years. There was a huge increase in these numbers in 2017, which the Health Ministry has promised to study. "The present analysis could be a starting point in the quest to reduce the numbers of such deaths," authors of the new study say.


The study by Dr Jacob Puliyel, Head of Pediatrics at St Stephens Hospital, and Dr V. Sreenivas, Professor of Biostatistics at the All-India Institute of Medical Sciences (AIIMS), both in New Delhi, is published in the peer-reviewed Medical Journal of Dr D.Y. Patil University.
Advertisement
PV is a combination of the DPT vaccine and two more vaccines against Haemophilus influenza type B (Hib) and Hepatitis B.

Starting December 2011, PV was introduced into India's immunization program to replace DPT vaccine in a staged manner with a view to adding protection against Hib and Hepatitis B without increasing the number of injections given to infants.

But sporadic reports of unexplained deaths following immunization with PV had been a matter of concern. Puliyel, Sreenivas and their colleagues undertook the study to find out if these deaths were merely coincidental or vaccine-induced.

The authors obtained data of all deaths reported from April 2012 to May 2016 under the Right to Information Act. Data on deaths within 72 hours of administering DPT and PV from different states were used.

For their study, the authors assumed that all deaths within 72 hours of receiving DPT are natural deaths. Using this figure as the baseline, they presumed that any increase in the number of deaths above this baseline among children receiving PV must be caused by this vaccine.

According to their analysis of the data provided by the government, there were 237 deaths within 72 hours of administering the Pentavalent vaccine has twice the death rate among infants who received DPT vaccine.

Extrapolating the data, the authors have estimated that vaccination of 26 million children each year in India would result in 122 additional deaths within 72 hours, due to the switch from DPT to PV.

"There is likely to be 7,020 to 8,190 deaths from PV each year if data from states with the better reporting, namely Manipur and Chandigarh, are projected nationwide," their report says.

The authors note that while the study looks at the short-term increase in deaths (within three days of vaccination) it does not calculate the potential benefits of PV on infant mortality, for example by protection against lethal diseases like Haemophilus influenza

In spite of the data presented in this paper from a large cohort, the authors point out that the evidence is merely circumstantial and not conclusive. "These findings of differential death rates between DPT and PV do call for further rigorous prospective population-based investigations," the study concludes.

Source: IANS
Advertisement
<< Get That Perfect Smile
Transgenders Quality of Life may Improve After Gender Reas... >>

Pentavalent Vaccine Included In Routine Immunization For Children In Nagaland
The Pentavalent vaccine containing five vaccines protects the child against pneumonia and ......

Pentavalent Vaccine to Roll Out in Andhra Pradesh, Telangana This Week
Prescribed by the Indian government's immunization program, Pentavalent vaccine will benefit more .....

Vaccination for Children
Vaccines are biological products that impart immunity to the recipient. Vaccines may be live attenua...