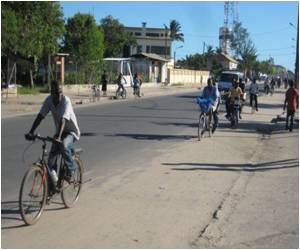 The cycling trend is kicking up in Delhi even among office goers. Pollution and space congestion has pressurised Delhiites to favour cycling to work instead of driving.

"Cycle is the future in India but the voice has to reach out," said Pankaj Munjal, president-designate, All India Cycles Manufacturers' Association.

Every Sunday, Munjal and a group of 150 cyclists from across walks of life assemble at the Lutyen's Bikers' Zone between Rashtrapati Bhavan and India Gate in the capital for 45 minutes of vigorous biking and bike-related discussions - which end with a small feast.


"We drive to India Gate at 6 a.m., offload our bikes and cycle on the biker's tracks," Munjal, also the managing-director of Hero Cycles, told IANS.

A recent study suggests that higher PM10 and NO2 (traffic associated pollutants) levels are associated with increase in myocardial infarction risk just 1-6 hours later following the exposure.
Advertisement
The bikes roll in every category from the regulation black bikes at Rs.10,000 to the designer models priced Rs.1.5- Rs.2 lakh, Munjal said. His company manufactures nearly six million of the nearly 13 million bicycles in India annually.

A new study unveiled March 22 by the Centre for Science and Environment (CSE) says Delhi has to wake up to the mobility crisis with non-conventional, eco-friendly and easier systems of transport.

"Increased use of car in the capital has reduced the carrying capacity of roads and by 2020, if the capital has to meet its target of 80 per cent of public transport share, it will have to spend more on cycling and walking," the study said.

The report says with the "new biking and walking facilities in some parts of Delhi like the BRT stretch between Ambedkar Nagar and Pragati Maidan, Vikas Marg from ITO to Laxmi Nagar, the Tughlaqabad stretch and the Noida Link Road - built post-Commonwealth Games - cycling is still seen as a streetscraping rather than continuous well-designed usable system".

"We have political commitment, will and interest, but it is actually work on the ground. We are not looking at cycling and walking as a small solution, but on a scale which actually works on the ground in the capital," Sunita Narain, director-general of the CSE, said at a forum, "Our Right of Way: Walk and Cycle".

Citing figures for the capital, Anumita Roychowdhury, executive director of the CSE, said "Delhi has one of the highest walk and cycle trips in the country at around 2.8 million".

"Even on the car-dominated roads like the Outer Ring Road, the share of cycles is quite close to that of autos - 7 and 9 per cent respectively," she said quoting figures. At least 34 percent Delhi homes own a bicycle and the domestic bike market has expanded by three percent every year," she said.

But the cycling lanes have remained discontinuous and the intricate design of the tracks have created barriers for cyclists, Roychowdhury said.

High speed motorised traffic often impede into the cycling lanes and there is no penalty on motor vehicle owners for encroaching on non-motorised roads. Cycling access to metro stations is also poor, he said.

The high rate of fatal accidents in the capital has been a stumbling block to increase in cycling and walking in the capital, and there were no efforts to make the roads safe for anybody, Satyendra Garg, the joint commissioner of police, said.

In 2011, nearly 104 cyclists were killed on the streets of the capital, he said.

"One cannot have proper cycling without the involvement of the city's governing bodies," said Rajesh Kalra, the initiator of Pedalyatri, a cycle initiative in the NCR region.

"I am trying to promote the concept of bike sharing in the capital which will allow a commuter or a traveller to rent a bike for Rs.5. But it requires funds and help from the government. The capital region needs more cycling space," Kalra told IANS.

Kalra said he is starting the "India Cycle Service" - a cycle rental with innovator Prabhat Agarwal, an IIT and IIM alumnus. Cycling enthusiasts and votaries in the capital are trying to emulate the Netherlands model, which promotes bicycles as a replacement for cars.

"The difference between the Netherlands and India is that in the Netherlands cycling is very much another mode of transport while in India it is something for the poor," Jeroen Buis, of the Dutch Cycling Embassy, told IANS.

Sinopril (2mg) (Lacidipine) Loram (2 mg) (Lorazepam) Post-Nasal Drip Blood - Sugar Chart Turmeric Powder - Health Benefits, Uses & Side Effects Noscaphene (Noscapine) How to Reduce School Bag Weight - Simple Tips Sanatogen Diaphragmatic Hernia The Essence of Yoga
This site uses cookies to deliver our services.By using our site, you acknowledge that you have read and understand our Cookie Policy, Privacy Policy, and our Terms of Use  Ok, Got it. Close
×