Pedaling on a Stationary Bike for a Free Meal

A suit-clad businessman pedals away on a stationary bike in the lobby of a well known eco-hotel in a Copenhagen suburb to reach the target for energy production and win a free meal at the hotel.

"A bit more sweat and I'll have pedaled enough for a free meal!" says Ruediger Spaetel with a smile as he changes gears. 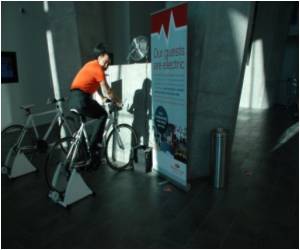 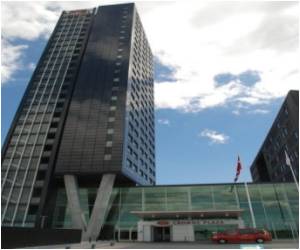 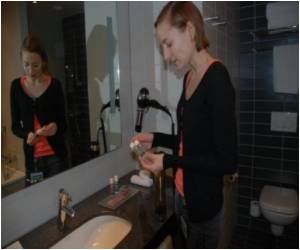 
On a business trip from Munich, Spaetel is staying at the Copenhagen Crowne Plaza hotel where guests are asked to help produce the building's electricity by climbing onto stationary bikes.


The energy produced by pedaling guests is stocked in a battery before being injected into the hotel's power supply.

Spaetel, in his 30s, says curiosity led him to mount one of the two bikes parked in the hotel lobby after checking in.

"This allows us to help reduce our carbon footprint in a healthy way," he tells AFP, adding that he is thrilled by the concept.

Adding to his enthusiasm is the fact that the hotel, which brands itself as "100 percent green", has put a price on its guests' sweat: producing 10 watt-hours of electricity, generally achieved with an eight to 12 minute workout, will earn the German businessman a 27-euro (33-dollar) voucher at the hotel restaurant.

The hotel's communication director Frederikke Toemmergaard estimates the establishment has offered a free lunch or dinner to more than 200 eco-conscious -- or simply hungry -- guests since the one-year experiment began in April.

The hotel itself opened last November, just in time for the UN Climate summit hosted in the Danish capital.

Built not very far from the Oeresund strait that separates Denmark from Sweden, the Crowne Plaza's concrete and steel tower is covered in some 1,500 solar panels that produce 170,000 kilowatt-hours of electricity, which is enough to power 55 households.

In the basement of the 86-meter (232-feet) skyscraper there is a geothermal well which covers the hotel's heating and air conditioning needs, slashing its energy bill by about 90 percent.

And in each of the 366 rooms, personal care accessories are biodegradable, taps are equipped with water-saving devices and all light bulbs are low-energy.

But that doesn't mean the Intercontinental chain's first "all-eco" hotel has clients roughing it.

"Everything was thought out with technologies respectful of the environment, without sacrificing quality, comfort, and the feeling of being at a four-star hotel," spokeswoman Toemmergaard insists.

Wall coverings, carpeting, and even the feet on the design furniture are made from recycled materials and are guaranteed not to contain chemical products, while the computers have power-saving screens.

And the guests who redeem their electricity-production vouchers dine on organic food, and the high-tech kitchen grinds all its garbage and sends it to a local a biogass central to be transformed into fuel.

"Often, when people think environmentally friendly, they think of smaller organic products that are less appealing than traditional offerings," she says, adding that there had been a real fight "to convince the chain we had made the right choice."

In the end, the franchises's owners agreed to carry the project through because they believed Copenhagen needed a hotel that reflected its green ambitions, Toemmergaard says.

The bicycle-filled capital, which is "one of the world's showcases for the environment and quality of life, which wants to become the first emission-free capital in 2025, should have a hotel that fits that image," she says.

The carbon-dioxide neutral hotel cost some 125 million euros (156 million dollars) to build and is about five percent more expensive to run than a normal hotel, but the owners expect to make up the difference.

"In five or six years we will have a return on our investment that shows that it pays to make an effort for the environment," Toemmergaard says.

Back in the lobby, Oliver Tham, the chief executive of Indonesian company Tanjung Lesung Waterfront Developments, is inspecting the stationary bikes.

He says he heard about the hotel back home and checked in because he was curious what a hotel committed to fighting climate change was like.

"I'd like to import the concept to Indonesia," he tells AFP before climbing on one of the bikes and beginning to pedal.

Out of breath and wiping sweat from his brow, he says it feels good "to participate in polluting Mother Earth a little less."

World's First Eco Friendly Robot Made of Cardboard Unveiled
Japanese scientists have unveiled the world's first environmentally friendly robot, which is made out of cardboard.
READ MORE

Aluminum Bottle More Eco Friendly Than Glass
A consumer packaging company has developed a lighter, resalable aluminum bottle that it hopes will replace glass bottles for many beverages, as it is more eco friendly.
READ MORE

Why Do We Eat - Nutrition FactsDiet Lifestyle and Heart Disease