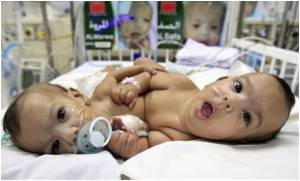 The separated Siamese twins Peace and Patience flew home to Nigeria after a successful separation at the Narayana Hrudayala Women and Child Institute.

The twins were separated on June 7 and spent three weeks in rehab in Bangalore before flying to Benin.

"It's a delight to see my daughters live like any other normal children. At the pre-pregnancy stage itself, we were aware of that they were conjoined twins, but still, we went ahead as I felt they are our children and we should own them in whatever form they are born," said the girls' father Emmanuel.


Narayana Hrudayalaya Woman and Child Institute director, Dr Ashley L J D'Cruz, said that the twins were fit to be discharged, but added that Peace had hernia, which would be rectified in six months time.

The twins arrived in India for surgery as they shared a common liver, small intestine, gall bladder and bilary gland. On June 7, they were separated in a marathon operation that involved 24 medical personnel.

Since the early times, the novel idea of transplanting tissues and other body parts from one organism to the other has captured the imagination of successive generations.
Advertisement
<< Burger King and McDonalds Move Towards Healthier Food
Mercury Levels Have Shot Up in Popular Species of Game Fish... >>

Jolie and Pitt Will Welcome Twins from France