Patients With Skin Pigmentation Disorders Use Sunscreen Than Others 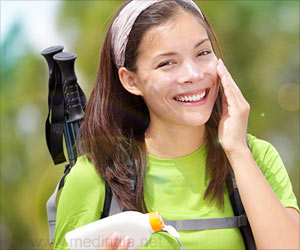 Patients with hyperpigmentation, a medical disorder that leads to darkening or increase in the natural color of the skin, are more likely to use sunscreen but do not use other protection measures.

There have been many studies on the general populations' sun-protective behaviors, but until now there has been little research into how hyperpigmentation patients are shielding themselves from the sun.

Skin diseases also known as dermatologic disorders are many in number and so are their causes. The common skin diseases or skin disorders are usually related to the epidermal layer of skin.
Advertisement
‘Women with melasma, a disease causes brown patches on the face, were more likely to wear sunscreen than those with other disorders.’

The survey looked at 404 adults who had a diagnosis of cutaneous hyperpigmentation. The majority of the patients reported using sunscreen, a number significantly higher than the general public.

Chromoblastomycosis, a chronic fungal skin disease, infects the skin and subcutaneous tissue through the opening of a traumatic injury. This dermatiaceous fungal infection responds slowly to fungal treatment.
Advertisement
While researchers found hyperpigmentation led to an increased use of sunscreen among patients, few reported taking other sun protection measures or reapplying sunscreen every two hours. Nearly half of the sunscreen users didn't know if their sunscreen provided broad spectrum protection.

"It is important for providers to educate patients on the many ways to keep their skin safe in the sun," said Neelam Vashi, MD, Director of the Center for Ethnic Skin at Boston University and Boston Medical Center and Assistant Professor of Dermatology at BUSM, who led the study.

"It's encouraging that so many patients are utilizing sunscreen, but we can still improve the practice of safe sun behaviors by improving counseling early in patients' diagnosis, recommending sunscreen use for all ethnicities, and providing a wide range of methods to decrease sun exposure."

Post-Nasal Drip The Essence of Yoga Find a Doctor Diaphragmatic Hernia Loram (2 mg) (Lorazepam) A-Z Drug Brands in India Drug Side Effects Calculator Calculate Ideal Weight for Infants Drug Interaction Checker How to Reduce School Bag Weight - Simple Tips
This site uses cookies to deliver our services. By using our site, you acknowledge that you have read and understand our Cookie Policy, Privacy Policy, and our Terms of Use