The research was presented today at the 2014 Multidisciplinary Head and Neck Cancer Symposium. The study results also found significant reductions in radiation dose to the salivary organs, and good local regional control.

Researchers evaluated 125 patients with node-positive oropharyngeal cancer who received chemoradiation at Memorial Sloan-Kettering Cancer Center in New York between May 2010 and December 2011. The average patient age was 57. Fifty-one percent of patients had base of tongue lesions; 41 percent had tonsil cancer; and 6 percent were classified as "other." The breakdown of patients' cancer stage/classification was: 74 percent T1-2 and 26 percent T3-4. All patients had cancer with lymph node involvement, including 16 percent N1; 8 percent N2A; 48 percent N2B; and 28 percent N2C.


Patients were categorized into two groups: those with sparing, or a reduction of radiation treatment volume to the region, of bilateral level IB nodes and those who underwent treatment without sparing. A prospective questionnaire regarding xerostomia (dry mouth) to assess late xerostomia was given to patients in both groups at each patient follow-up visit; clinical assessment (observer-rated) xerostomia scores were also recorded.

The participants who received treatment involving sparing experienced significant improvement in patient-reported xerostomia summary scores (p=0.021) and observer-rated xerostomia scores (p=0.006) over the group in which there was no sparing. The two-year local regional control rate for the spared group was 97.5 percent and 93.8 percent for the group treated, indicating a low rate of cancer recurrence at the original tumor site.

"Radiation therapy plays an important role in the treatment of head and neck cancers," said Moses Tam, BS, lead author of the study and an MD candidate in his final year at New York University School of Medicine. "Poor salivary function is the most common side effect of radiation treatment to the head and neck region. Our data shows that it is safe to spare the tumor-free level IB lymph nodes in oropharyngeal cancer from radiation treatment. Sparing this lymph node level will reduce radiation dose to several nearby salivary organs and therefore cause less damage to a patients post-treatment salivary function." 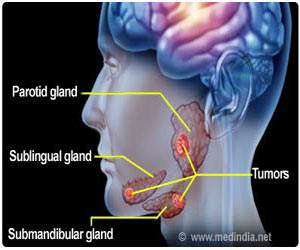