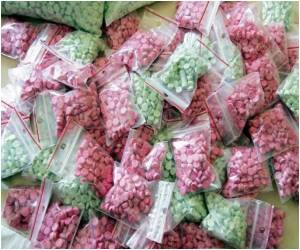 Nearly a year after its ban in the UK, a new survey has revealed that clubbers are still taking designer party drug miaow miaow.

It found that the ban has failed to reduce its availability and might have even driven some users to harder drugs, reports the Telegraph,

A survey by the Independent Scientific Committee on Drugs has found that users have noticed little difference in their ability to get hold of mephedrone, which is nicknamed miaow miaow, since it was banned.


The report, which will be published this week and is the first authoritative survey of mephedrone users since the government added the drug to the list of banned substances in April 2010, reveals that more than half of those questioned had noticed no change in the availability of the drug in their area.

It comes after a recent research revealed that 40 new synthetic drugs have flooded into the UK during the past year.

Professor David Nutt, a leading psychopahrmacologist who chairs the committee, said banning mephedrone did not appear to have been effective.

He warned that the move, which came after mephedrone had been linked to a number of deaths that were later found not to be attributable to the drug, could be driving demand for other new drugs.

"It is not at all clear that the ban on mephedrone has helped to reduce harm. The ban has not greatly affected the availability of mephedrone because people were stockpiling before the ban came in but also because it has been very difficult to stop it from coming into the country," said Nutt.

"One of the dangers of the approach that has been taken is that if we ban every new drug without a balanced view, then people will keep making more new drugs to replace them and eventually they will make something that is extremely toxic which, when kids take it, they will die," he said.

"So we could be provoking harm by the way we are handling these new drugs," he added.

The new survey, which questioned 1,500 drug users in an online questionnaire, found that 58 percent of the respondents said they were less likely to use mephedrone since the ban, but 45 percent said they would still try to get hold of it despite the ban and 51 percent said the ban had not affected availability of the drug.

A fifth of those who responded said they had experienced a negative reaction to mephedrone after taking it.

Nutt has now urged the Home Office's Advisory Council on the Misuse of Drugs to review the ban on mephedrone and said future classifications of new drugs need to be informed by scientific evidence on the effects and harm that the drugs can cause.

America is facing a latest drug problem in the form of bath salts. The bath salts are being sold under the names like 'Ivory Wave', 'White Lightning' and 'Hurricane Charlie'.
Advertisement
<< Specially-abled Artists Present Dance Show on Wheelchairs
'Gay Marriage' in Churches Being Considered in Britain >>

Find a Hospital Nutam (400mg) (Piracetam) Indian Medical Journals A-Z Drug Brands in India The Essence of Yoga Sinopril (2mg) (Lacidipine) Vent Forte (Theophylline) Pregnancy Confirmation Calculator Selfie Addiction Calculator Iron Intake Calculator
This site uses cookies to deliver our services. By using our site, you acknowledge that you have read and understand our Cookie Policy, Privacy Policy, and our Terms of Use