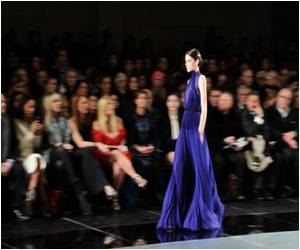 Paris will be hosting a landmark exhibition on Saturday in which some of the biggest names from the fashion world will present exquisite dresses that will trace the history of haute couture.

The exhibition for the first time gathers more than 100 iconic creations from 150 years of fashion accompanied by archive photographs and drawings.

The story begins with an 1895 high-necked tea dress in green velvet and silk by the man considered the father of haute couture, Briton Charles Frederick Worth.


Worth, from Lincolnshire in eastern England, opened for business in central Paris in 1858 at 7, Rue de la Paix; others followed and by 1911 the Paris Haute Couture Association had been formed.
Advertisement
At an exhibition of decorative arts held in the French capital in 1925, 75 couture houses were represented.

Highlights from the 1920s and 1930s include Jeanne Lanvin's 1929 black taffeta "Bel Oiseau" (Beautiful bird) dress and a 1932 ivory silk robe by Madeleine Vionnet so timeless it could have been made yesterday.

By 1930, economic circumstances forced a contraction with collections slimmed down from a staggering 400 designs to 100, according to exhibition curator Olivier Saillard, director of Paris's Galliera fashion museum.

"They (the fashion houses) had already seen the disappearance -- as a result of the First World War -- of their aristocratic customers who used to come to Paris a lot," he said.

World War II also hit the industry and in 1945 the number of designs per collection was again reduced to 75.

In 1947, Christian Dior opened his own couture house, followed in 1952 by Hubert de Givenchy and Pierre Cardin. By 1953, there were some 59 couture houses.

For Saillard, the 1930s were the stylistic "golden age" of haute couture for which Paris is famed, along with the 1950s.

"All designers go back to the 1950s, fashion has not really changed," said Saillard.

In 1961, Yves Saint Laurent founded his own fashion house and presented his first collection the following year.

Today around 20 houses are involved in haute couture, organising shows twice yearly in January and July, with about a dozen of those belonging to the haute couture association and able to meet its strict criteria such as the amount of work done in house by hand.

The entire industry is based on an estimated several hundred customers worldwide, although designers report that numbers are rising due to new customers from newly-rich parts of the world such as China, Russia and Brazil.

The exhibition brings the Paris couture story into the modern era with a figure-hugging beige lycra dress by Alaia from 1990 and a 2008 purple satin ball gown by John Galliano for Christian Dior.

Visitors can judge for themselves how sustainable couture is in the 21st century, but Saillard says he finds it reassuring that "there are not only houses such as Dior and Chanel but also (Jean Paul) Gaultier where younger people work in this heritage craft and which try to safeguard the skills".

Meanwhile, the number of people employed in the wider fashion world is today estimated at 60,000 in Paris alone.

Source: AFP
Advertisement
<< Turkey Hopes to Place Immigrant Kids in Homes Where Their C...
AIIMS Gets Maximum Budget Share Among Hospitals and Researc... >>

Breast Lumps in Women - Symptom Evaluation
Most breast lumps are caused by hormonal changes in a woman and may not be cancerous. Keeping the .....