Parents Pass On Smoking Habits to Their Children: Study 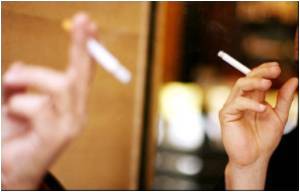 Smoking habits are passed down from mother to daughter and father to son, according to a new study.

"However, if a mother smokes it does not seem to impact on the probability of her son smoking, and similarly a father that smokes does not affect his daughter", said Loureiro, a researcher at the Universidade de Santiago de Compostela (USC), in Spain.

Loureiro carried out the study in homes where both parents were present as well as in single parent households, which were primarily headed by mothers.

But in single-parent households, the smoking habits are passed on regardless of the gender.

In this case, a son's likelihood of smoking if the mother smokes is 32 percent, and 28 percent for a daughter.

"These results have clear importance in terms of designing public policies to combat smoking. Policies that are successful in reducing smoking habits among parents will also affect their children. Anti-smoking policies for young people need to be put in place that will also include the family and social context in which they live", concluded Loureiro.

The research has been published in the journal Oxford Bulletin of Economics and Statistics.