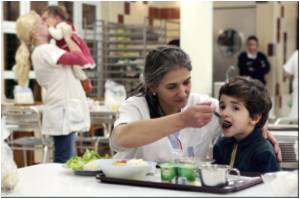 New research has pointed out that parents' preference for buying nutritious foods falls to 50 percent when they're picking up products for the kids.

The likely explanation is that parents give in at the grocery store compromising their preferences based on what they believe their children will accept, said study author Irwin Levin of the University of Iowa College of Liberal Arts and Sciences.

"Perhaps they think the child won't eat the healthy option, or they suspect that the child will beg for the unhealthy foods," he said.


The study involved 43 seven-year-old children and one of their parents (usually the mother), who rated eight combinations of cards displaying food products.
Advertisement
They rated each item on a five-point scale indicating how good or bad they thought it was. Kids indicated how they'd feel if their parents bought the product, and parents indicated the likelihood of purchasing the product for themselves and for their children.

"Other studies have found evidence of this as well," Irwin Levin said.

"There are indications of basic physiological differences-that is, boys require more sweetness to like a food than girls do. It's possible there is also a cultural effect in play, with the young girls already developing concerns about thinness."

The findings were published in the Journal of Consumer Behaviour.