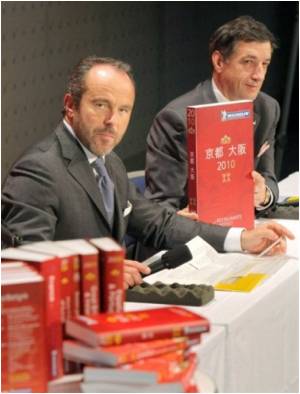 Classes teaching how to be better moms and dads have begun taking France by storm, which have long flourished in English-speaking countries.

French parents today want a new kind of authority that does not crush children but does not allow them to run wild either, said Beatrice Sabate, a clinical psychologist who adapted a method devised in California called "positive discipline" for France.

Taste of Fukushima Brought to France by Japanese Chef

Chef Harutomo Hagi was a man on a mission when he arrived in France with a suitcase full of smoked chicken and wasabi from the stricken Japanese region of Fukushima.
Advertisement

"There are rules, but the child helps to define them," said Sabate.


"Children are growing up in a different world than that of their parents," when teachers were more severe and adults always knew best.

Today "parents are looking to have relationships that are based more on cooperation," she said.

It counted some of the world's greatest sportsmen among its clients, from car racer Alain Prost to Zinedine Zidane.
Advertisement
In one class, nine mothers and three fathers meet in central Paris one evening a week, sitting in a circle with two trainers to learn "positive discipline", which combines firmness with an emphasis on the positive.

Slogans on the wall intone: "Encouragement is to the child as water is to a plant" and "Mistakes are excellent learning opportunities."

This session is devoted to "inappropriate behaviour", with participants role-playing some of the most common sources of conflict: homework, computer and television time, going out.

"OK, it's your turn. You're a child again," says trainer Alix de Salaberry, to a participant playing the role of a teenage girl who wants to sleep over with a friend.

The "mother" says no and the "daughter" stamps her foot, shouting, "I hate you!"

"What do you feel?" De Salaberry asks the "mother" who replies: "She scares me. I'm not going to manage."

The role play starts again, but this time the "mother" has to give an "appropriate response".

So she offers: "I'm really glad you have such good friends. Like you, when my mother said no, I was very disappointed. But it's not possible tonight, your grandmother is coming for dinner. Let's find another date."

At the end of the session, the students are given homework: "Role-play with your child. You be the child and your child can be the adult."

"Positive discipline" workshops, originally developed by American family counsellor and educator Jane Nelsen, are growing not just in the capital but elsewhere in France.

Demand has been so great that Sabate no longer teaches classes herself, but devotes her time to training parenting teachers, including students from Belgium, Switzerland and Morocco who train in France then return home to teach "positive discipline" in their own countries.

In France, "views have changed of authority and making mistakes," Sabate told AFP. "Before, children were subordinate to their parents, students to the teacher, the wife to the husband, the worker to the boss."

French education traditionally emphasised the negative: pupils could even get a score below zero on tests. Parents, especially those who have lived in English-speaking countries, try to compensate at home with positive reinforcement.

Alice, 42, said: "Our parents didn't think about what they were doing. I was raised with spankings and lashings with a riding crop. That damages a child. I want to do as little damage to my children as possible. No shouting, no hitting."

The Temp'O Jeunes association specialises in parents of teenagers who are under pressure at school or who are home alone after school or even on their own for several days if a single parent leaves on a business trip.

Among the tools suggested to ensure a "balanced life" for the child is to draw up a schedule that plans out activities down to the half hour: homework, football and violin practice, without forgetting time to read, dawdle or be with friends.

"Parents wonder how to be as effective as possible with the little time they have. They are under pressure from society to succeed in everything," said Emmanuelle Guilhamon, the architect of Temp'O Jeunes.

"Parents don't trust themselves anymore. If they listened to what they have in their hearts or in their gut, they would know how to solve the problems," said Guilhamon, who has four children.

'My mother's a drag'

"The bond with the child has become the most precious in life, because the love bond is fragile, ephemeral," said psychologist Beatrice Copper-Royer. "You expect a lot of it, and many parents are afraid of approaching it badly, of not being up to raising the ideal child that they want."

She added: "The boom in the coaching market reflects the disarray we see in parents. It's very revealing of our society's performance cult. You have to train yourself as much as possible to have the best possible child."

A mother who gave only her first name, Celine, took her seven-year-old son to a number of professionals including a speech therapist to little avail.

But "thanks to 'positive discipline', I put myself in my child's place: 'Brush your teeth, do your homework, hurry up!' ... I thought, 'My mother's a drag'. It was a shock."

Since taking the course, she said: "My son cuddles me all the time. It's magical again to be a parent."

The world's oldest movie theatre, where the first films of the pioneering Lumiere brothers were screened in 1899, reopens after an extensive facelift in a sleepy southern French town.
Advertisement
<< Child Gun Shot Wounds Linked To Prevalence of Household Gun...
A New Protein Fold Was Discovered With a Transport Tunnel B... >>

More News on:
Parental Tips to Raise Your Child Right