Parade Against Homophobia in Havana 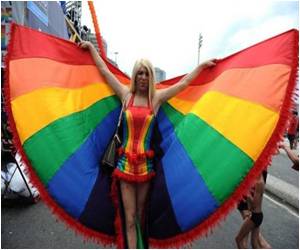 A conga line in central Havana had more than 300 people parading to the beat of drums and trumpets in a protest against homophobia.

"We must change consciousness," said Mariela Castro, the daughter of President Raul Castro, who convened the parade as the head of a national center for sex education.

Participants danced through La Rampa, in the crowded heart of central Havana, for more than half an hour, evoking a range of reactions from onlookers, from approval to indifference to mockery.


"I came to dance and to protest against homophobia," said Farah Mariah, who claims to be the first person in Cuba to undergo a sex change and now calls herself the "Diva of the Transvestites."
Advertisement
"Socialism, yes; homophobia, no," protesters chanted.

Signs in the crowd read "I didn't lose a daughter, I gained two," and "Hatred and fear are vanquished only with love."

Cuba's communist regime outlawed homosexuality during the 1960s, going so far as to intern gays in work camps, and homosexuals endured social ostracism in the decades that followed.

Castro's National Center of Sexual Education has campaigned to turn around Cuban attitudes about gays over the past seven years.

Dance Against Homophobia Urged by Castro's Daughter
Cubans have been urged by Raul Castro's daughter to join a traditional "conga" dance against ......

Australia's 'Homophobia-free Zones' Plan Under Attack
Australia's gay capital Sydney came under attack from a rebel city councillor on Monday over its ......