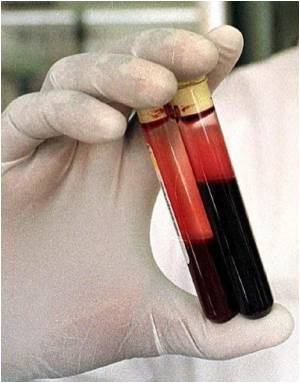 The first "dipstick" test for instantly determining a person's blood type at a cost of just a few pennies has been developed by scientists.

Their study on the test, which involves placing a drop of blood on a specially treated paper strip, appears in ACS' semi-monthly journal Analytical Chemistry, where the authors say it could be a boon to health care in developing countries. The test also could be useful in veterinary medicine, for typing animals' blood in the field, they note.

Gil Garnier and colleagues explain that determining a patient's blood type is critical for successful blood transfusions, which save millions of lives each year worldwide. There are four main blood types: A, B, AB, and O. Use of the wrong blood type in a patient can be fatal. Current methods for determining blood type require the use of sophisticated instruments that are not available in many poor parts of the world. An inexpensive portable test could solve that problem.


The scientists describe development of prototype paper test strips impregnated with antibodies to the antigens on red blood cells that determine blood type. In lab tests using blood samples from human volunteers, the scientists showed that a drop of blood placed on the strip caused a color change that indicated blood type. The results were as accurate as conventional blood typing. "The paper diagnostics manufacturing cost is a few pennies per test and can promote health in developing countries," the report notes.

What is right diet for you may be the wrong one for another. The diet that suits you will depend on your ...

The blood group of a person is determined by the presence or absence of certain inherited antigenic ...