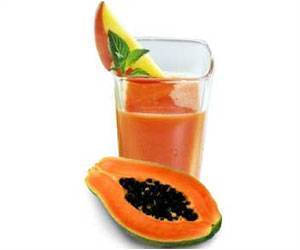 Scientists have explored the health benefits of papaya, including its usage in reducing chances of cardiovascular diseases and controlling diabetes.

Speaking to Pakistan Daily Times, Naseem explained that juice of papaya seeds is every essential to protect kidney from becoming dysfunctional because seeds contains flavonoids and phenotic, which provides prevention from germs of such diseases.


Besides this papaya seeds can also protect from number of infections and could also be used to clean intestines insects, she added.

She cited that in Nigeria, 76.7 percent children got rid from intestines insects by drinking juice of papaya seeds in seven days.
Advertisement
People in Japan also believed that liver could be protected from diseases with usage of one teaspoon of papaya seeds, Naseem said.

It seeds can be used with milk to avoid typhoid disease and it can also cure from hemorrhoids-kind diseases. Papaya seeds also contain a special compound, which helps to stop formation of tumor, Naseem added.

He noted that enzyme papain in papaya gives relief from indigestion and gastric problems, and added that chemical integrate carpain in papaya also helped from some kind of diseases.

Besides papaya was also very useful to control or stop diabetes, Nasir said.

He asserted that cancer can be eradicated through daily intake of papaya, as it contains chemical integrates such as lycopene and others.

He advised that patients suffering from hypertension to include papaya in their daily diet. Papaya also reduces chance of heart attack, he added.

Nasir noted that papaya is also known as body cleaner as it helps to maintain internal body system at normal stage.

Vitamin A in papaya helps improve the eyesight vision. It also increases fertility power in male and female, he said.

Papaya helps to stop blood clothing in feet of people, who are in sedentary job while magnesium in papaya helps to eliminate face acnes. It also gives cure from soling on injuries.

In addition, papaya also eliminates nausea and constipation complaints and it also protect from formation of emphysema in body of those who are habitual of smoking, the researchers said.

Health Benefits of Papaya Leaves
Papaya leaves are just as valuable as the fruits, and it has been used in herbal medicines to help ....

99 In US Fall Ill Due to Salmonella-Infected Mexican Papayas
Mexican papayas tainted with salmonella have sickened 99 people in the United States, the Centers .....