Papal Inspiration for Showbiz With the Sing-Along Saint 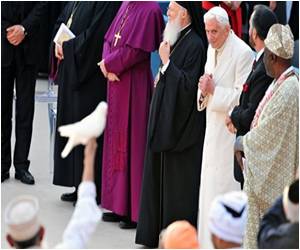 Audience in Rome enjoy the flourish of theater shows about Pope John Paul II's musical biography, revealing the life of the former playwright and future saint, just before his canonization on Sunday.

Highlights like his famous meeting with his would-be assassin Ali Agca in 1983 and his famous phrase "Be not afraid!" have become modern dance numbers and jaunty tunes in an unusual cocktail of piety and showbiz.

Nuns and priests were out in force at a performance of "Karol Wojtyla: The True Story" -- one of at least three pope-linked productions in the Eternal City.


Backstage, 26-year-old actor Virgilio Brancaccio donned a cardinal costume and rehearsed his lines as he prepared for his star role as the Polish pontiff.
Advertisement
"The hardest thing for me was combining his strong charisma with a great gentleness and purity," said Brancaccio, who plays Wojtyla as a young man in a plot that ends with his Vatican election in 1978.

"We know his papacy but we don't really know what he was like as an adolescent and a young man," said Brancaccio, a television actor and former participant in the Italian version of the talent show X Factor.

In the audience, a smiling Sister Carmela from the Daughters of St Anne congregation was thrilled.

"We're already praying a lot and it's been a great gift to see this before the canonisation!" she said.

"I passed the theatre and saw the poster and I was immediately drawn to it because I knew the pope well. He blessed me when I was a student!"

The musical features songs composed by Israeli singer Noa and premiered in Krakow, where Wojtyla was archbishop for many years, with the pope's longtime friend Cardinal Stanislaw Dziwisz in attendance.

Wojtyla was born in 1920 and took up theatre in the 1930s when he was a student of languages at the Jagellonian University in Krakow, performing in various productions and writing plays even during World War II.

In the run-up to the canonisation, the French seminary in Rome has staged a production of a play written by Wojtyla entitled "Our God's Brother" about the life of Polish painter-turned-monk, Saint Adam Cmielowski.

Wojtyla was ordained in 1946 and went on to become one of the longest-serving popes in history, who was credited with helping to bring down communism in Europe.

Father Giuseppe Spedicato, the author of a second musical in Rome about Wojtyla, said his theatrical background prepared him well for the papacy.

As he oversaw the final rehearsals for "Be Not Afraid!", Spedicato said he first had the idea for a musical in 1994 when John Paul II came to visit his diocese in Lecce in southern Italy.

"Knowing about his passion for theatre, I told him that I wanted to write this musical and he said 'Go for it!' That's where it all started," he said.

"As Christians and as priests, we use theatre also as a way of transmitting Bible values and teachings."

The musical, which is sponsored by the Vatican's culture ministry, opens on Monday near St Peter's and hopes are high that Pope Francis might attend.

Francis is also being honoured in a special evening of song and dance at Piper -- one of Rome's top nightclubs -- on the day of the canonisations of John Paul II and John XXIII.

The overlap between faith and showbusiness is not as jarring in Italy as it might be in more secular societies and it came naturally to Danilo Brugia, the actor playing John Paul II in "Be Not Afraid!".

"I often turn to John Paul II in my own prayers. I think we need initiatives like this to bring people closer," said Brugia, before rehearsing his favourite scene -- the pope's meeting in prison with Agca.

But not all the actors are religiously inspired.

"It's part of our job to transform ourselves!" said Roberto Rossetti, who plays Wojtyla's brother Edmund in "Karol Wojtyla: The True Story".

"Sometimes we have to believe what we do not believe in and make the public believe it. We have studied how to fake it!"

Source: AFP
Advertisement
<< Link Between Down Syndrome and Leukemia Uncovered by Dana-F...
Gene Responsible for Low Tolerance of Pain >>

Polish Pope is Still a Rock Star
John Paul II, the charismatic Polish pope who made a name for himself by circling the globe, was ......