Pandas Thought to be Bamboo-Loving, also Found to Have a Sweet Tooth

by Himabindu Venkatakrishnan on  March 27, 2014 at 5:37 PM Environmental Health 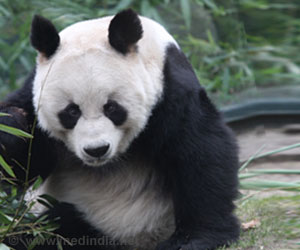 It is well-known that giant pandas are continually chomping on bamboo to fulfill a voracious appetite, but they were recently found to have a sweet tooth too, new research from the Monell Center reveals. A combination of behavioral and molecular genetic studies demonstrated that the giant panda both possesses functional sweet taste receptors and also shows a strong preference for some natural sweeteners, including fructose and sucrose.

"Examining an animal's taste DNA can give us clues to their past diet, knowledge that is particularly important for endangered animals in captivity," said study author Danielle Reed, PhD, a behavioral geneticist at Monell. "This process can provide information on approaches to keep such animals healthy."

The Monell researchers studied the giant pandas as part of a long-term project focused on understanding how taste preferences and diet selection are shaped by taste receptor genes.


One previous study found that cats, which must eat meat in order to survive, had lost the ability to taste sweets due to a genetic defect that deactivates the sweet taste receptor.

Although giant pandas and cats belong to the same taxonomic order, Carnivora, the giant pandas have a very different diet, as they feed almost exclusively on bamboo.

Noting that bamboo is a grass-like plant that contains very small amounts of sugars and does not taste sweet to humans, the researchers wondered whether giant pandas, like their Carnivora cat relatives, had lost sweet taste perception. An alternate possibility was that the panda maintain a functional sweet taste receptor, similar to other plant-eating mammals.

In this study, published online in the open-access journal PLOS ONE, eight giant pandas between three and 22 years of age were studied at the Shaanxi Wild Animal Rescue and Research Center in China over a six-month period.

For taste preference tests, the animals were given two bowls of liquid and allowed to drink for five minutes. One bowl contained water and the other contained a solution of water mixed with one of six different natural sugars: fructose, galactose, glucose, lactose, maltose, and sucrose. Each sugar was presented at a low and a high concentration.

The pandas preferred all the sugar solutions to plain water. This was especially evident for fructose and sucrose, as the animals avidly consumed a full liter of these sugary solutions within the respective five-minute test periods.

"Pandas love sugar," said Reed. "Our results can explain why Bao Bao, the six-month-old giant panda cub at the National Zoo in Washington, DC, is apparently relishing sweet potato as a first food during weaning."

Parallel cell-based studies showed a relationship between the pandas' behavior and how panda taste receptor cells respond to sweeteners in vitro.

Using DNA collected from the giant pandas during routine health examinations, genes that code for the panda sweet taste receptor were isolated and then inserted into human host cells grown in culture. These cells responded vigorously to sugars but not to most artificial sweeteners. This step helped investigators confirm that pandas have a functional sweet taste receptor that underlies their ability to detect and respond to sugars.

"This is the first study to address taste perception in the giant panda as it relates to feeding behavior. We hope to extend this research further to examine bitter taste perception," said lead author Peihua Jiang, PhD, a molecular biologist at Monell. "The results could have significant implications for the conservation of this endangered species as their naturals habitats continue to be demolished."

Also contributing to the study were Monell scientists Jesusa Josue-Almqvist, Xia Li, Joseph Brand, Robert Margolskee, and Gary Beauchamp, along with Xuelin Jin of the Shaanxi Wild Animal Rescue and Research Center in China. Research reported in the publication was supported by grants from the National Institute on Deafness and Other Communication Disorders (DC0101842 and 1P30DC011735) of the National Institutes of Health and by institutional funds from the Monell Chemical Senses Center. The content is solely the responsibility of the authors and does not necessarily represent the official views of the National Institutes of Health.

Bamboo Food
Here's a recipe of the bamboo shoot that's healthy, tasty and easy on your palate. Be sure to try it out!
READ MORE

Bamboo Fibre Could Protect Against Ultraviolet Rays
Bamboo fibres could come to the rescue of Australians haunted by skin cancer. It is a country where 1200 people die of melanoma each year.
READ MORE

Pickles
Health benefits of eating pickles are numerous as they are rich in iron, potassium, calcium, manganese and vitamin A. Pickles not only benefit normal people, but also benefit obese and pregnant women.
READ MORE