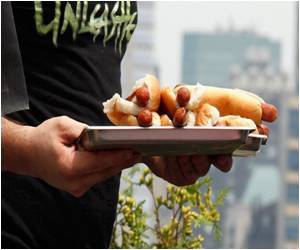 Men who consume more than 1.5 servings of pan-fried red meat per week are 40 percent at higher risk of developing prostate cancer, finds a research.

Mariana Stern from the Keck School of Medicine of USC, the lead researcher, also revealed that the study has provided important new evidence on how red meat and its cooking practices may put some people at the risk of getting the deadly disease.

Prostate cancer is fast gaining as a common cancer form among men; more threatening since its symptoms often go unnoticed until it's too late. This quiz tests your knowledge on prostate cancer, its diagnosis and treatment options and is as mandatory for men as the screening tests mentioned here are!
Advertisement


The research has found that cooking red meat at high temperatures may produce a potent chemical carcinogen, which triggers the cancer.

Researchers examined data from nearly 2,000 men who participated in the study. Study participants were asked to complete a comprehensive questionnaire that evaluated amount and type of meat intake, including poultry and processed red meat.

Treatment options of prostate cancer includes waiting, surgery, radiation, hormone therapy, chemotherapy, cryosurgery or biologic therapy.
Advertisement
Besides this information regarding cooking practices was obtained using color photographs that displayed the level of doneness. More than 1,000 of the men, who were included in the study, were diagnosed with advanced prostate cancer.

"We found that men who ate more than 1.5 servings of pan-fried red meat per week increased their risk of advanced prostate cancer by 30 percent," Stern said.

"In addition, men who ate more than 2.5 servings of red meat cooked at high temperatures were 40 percent more likely to have advanced prostate cancer.

The team found that, hamburgers were linked to a higher risk of prostate cancer than steaks, especially among Hispanic men.

They also found that men with diets high in baked poultry had a lower risk of advanced prostate cancer, while consumption of pan-fried poultry was associated with increased risk.

Although, the researchers do not know why pan-frying poses a higher risk for prostate cancer, they suspect it is due to the formation of the DNA-damaging carcinogens-heterocyclic amines (HCAs)-during the cooking of red meat and poultry.

Besides these two, other carcinogens such as polycyclic aromatic hydrocarbons (PAHs) are formed during the grilling or smoking of meat.

"The observations from this study alone are not enough to make any health recommendations, but given the few modifiable risk factors known for prostate cancer, the understanding of dietary factors and cooking methods are of high public health relevance," Stern added.

This study has been published in the journal Carcinogenesis.

Loram (2 mg) (Lorazepam) Find a Hospital Indian Medical Journals Blood Pressure Calculator Find a Doctor Blood - Sugar Chart The Essence of Yoga Sanatogen How to Reduce School Bag Weight - Simple Tips A-Z Drug Brands in India
This site uses cookies to deliver our services. By using our site, you acknowledge that you have read and understand our Cookie Policy, Privacy Policy, and our Terms of Use