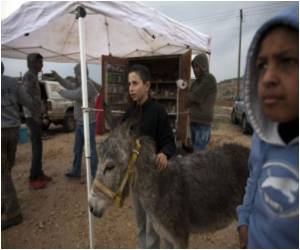 Mohamed Abu Aisha took part in a US peace camp with Israelis in 2012, but now he wonders if some of them are flying the warplanes overhead in Gaza.

Standing in the Tuffah neighbourhood in eastern Gaza City, the 17-year-old stares at the devastation left by an Israeli strike in which 18 people were killed on Saturday night.

A newly-formed team of bodyguards come together to form, Secure Land , a security firm whose mandate covers everything from minding VIPs and securing hotels.
Advertisement

The target appears to have been a Hamas police chief, but the missile killed a significant number of his extended family, with two rockets slamming into the home of a cousin he was visiting shortly after Ramadan prayers.


"It is a disaster," says Abu Aisha, who lives two streets away.

"The blast was so big that our house shook. All the dust and debris came in through our windows -- we can't close them because otherwise they shatter when there are air strikes."

Displaced Palestinians Learn Their History Through "Know Thy Heritage" Programme

Olga Kishek was just a child when her family left the West Bank but a Palestinian programme encouraging participants to know thy heritage has brought her back to her birthplace.
Advertisement
Abu Aisha just graduated from Gaza's American International School and is eager to show off his fluent English.

He honed his language skills during two months in the United States in 2012, when he took part in a peacemaker's programme with Israelis and others living in conflict zones, called Seeds of Peace.

"It's a programme that brings people living in conflict together and allows them to talk to each other," he says.

It was the first time he had talked at length to Israelis, and he formed cautious acquaintances with some, as he tried to explain things from the Palestinian point of view.

He stayed in touch with them, but recently discovered that some have begun their mandatory military service.

"I look around and I wonder if the people I met are now the ones that are bombing us."

Since the Israeli air strikes began on Tuesday, Abu Aisha has stopped contacting the Israelis he met.

And he sighs in frustration when he talks about those who are now in the military.

"I am disappointed in them. I expected and I hoped that they might refuse to enter the army, but now they are part of that criminal force," he says.

All around him is the detritus of the family killed in Saturday's strike, one of more than 1,300 Israeli raids that have killed 166 people in just six days.

The blast leveled the building and sheared the facade off a neighbouring structure, exposing a kitchen and a fridge with its door ripped off, full of food and drink.

A nearby UN school also scars from the strike -- all the windows blown out and a large hole blasted through its outside wall.

On the ground are children's notebooks, a woman's high-heeled shoe, a purple nightgown, even an x-ray.

On a nearby piece of land, 17 graves have been dug to receive some of those killed in the blast.

A photo of the family patriarch Majed al-Batsh lies on a yellow blanket covering some of his body parts, as well as parts belonging to other family members.

The dead are buried in chaos, with mourners crowding around the row of graves.

One body is lowered in, then removed, rotated, and lowered in again to ensure it is facing the right direction.

Standing near the remains of one of the rockets that hit the Batsh house, Abu Aisha says he is hoping to become a doctor.

He has finished high school and now hopes to travel to Turkey to study medicine.

"The level of medicine here and the medical knowledge is so low," he says.

"So I want to study it so I can help my country."

With the prospect of peace looking increasingly like a pipedream, Abu Aisha can imagine himself one day working in Gaza City's Shifa hospital, treating those hurt in future conflicts.

"I expect the coming decades will be full of wars here, so we will need people who can help people," he told AFP.

The crumbling remains of the Holy Land's oldest monastery, which is a haven of peace in Gaza Strip, are in danger of disappearing for lack of funds to preserve them.
Advertisement
<< Fashion Show Organizer Banned for Dresses With National Fla...
Cause of Mysterious Food Allergy Found, New Treatment Sugge... >>

Fish therapy has found its way to the Gaza Strip with Fouad Yahya, who learnt about it on the internet, becoming one of the first patients to be treated for his skin disease by a fish.
Advertisement
News A-Z
A B C D E F G H I J K L M N O P Q R S T U V W X Y Z
What's New on Medindia

Indian Medical Journals Daily Calorie Requirements The Essence of Yoga Calculate Ideal Weight for Infants Selfie Addiction Calculator Find a Hospital Accident and Trauma Care Blood Donation - Recipients Noscaphene (Noscapine) How to Reduce School Bag Weight - Simple Tips
This site uses cookies to deliver our services.By using our site, you acknowledge that you have read and understand our Cookie Policy, Privacy Policy, and our Terms of Use  Ok, Got it. Close
×