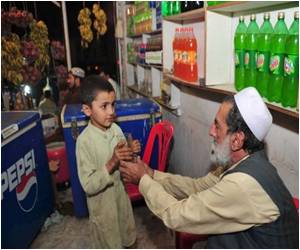 Pakistanis spent almost 50 percent of their household budget on food in 2012, finds a survey.

According to The Express Tribune, a report by the US Department of Agriculture's Economic Research Service revealed that out of the 84 countries surveyed, Pakistanis spend more of their income on food than any other country.

Despite having faced an armed attack by militants in the country, Sri Sri Ravi Shankar revealed that he still sees dialogue as the best way for peace between Pakistan and Taliban.
Advertisement

The report says that an average Pakistani spends 47.7 percent of their house hold budget on food consumed at home.


The statistics reportedly account for the highest in the world.

While the average consumer expenditures per person in Pakistan is 871 dollars- including personal expenditures on goods and services, people spend 415 dollars on food at home.

The military operation in Pakistan may be making headway in clearing militant hideouts, but it has shattered the dreams of a father of 36 children of taking a fourth wife
Advertisement
Meanwhile, an average Indian spends almost 220 dollars every year on food at home, which accounts for 25.2 percent of their total consumer expenditure every year.

In the US, an average American citizen spends about 6.6. percent of their house hold budget on food at home.

Besides the US, people in Singapore, United Kingdom and Canada spend less than 10 percent of consumer expenditure on food, the report added.

The craftsmen and traders of Peshawar's jewelry bazaar have, for 400 years, cut, polished, set and haggled over precious gems dug from the rugged mountains of northwest Pakistan.
Advertisement
<< Spanish Missionary Infected With Ebola to Fly Back Home to ...
Ebola Virus Death Toll Nears 1000 Mark >>