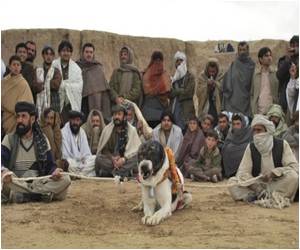 Pakistan's transgender community is now striking out into politics.

They may only be seven out of 23,000 candidates with little chance of getting elected, but they have livened up an otherwise lacklustre campaign and set an important marker for their rights in the conservative Muslim country.

"People don't believe we can be corrupt because we don't have children and families," says independent candidate Sanam Faqeer in the southern city of Sukkur.


"We don't need to collect wealth and build villas for our next generations by stealing people's money as other politicians do," she added.

In Pakistan, there are an estimated 500,000 "eunuchs" -- a community of castrated men, hermaphrodites, transsexuals, transvestites and homosexuals, traditionally paid to help celebrate the birth of a son or to dance at weddings.
Advertisement
When the Supreme Court in 2009 recognised them as a "third gender", ordering they be issued with separate identity cards, it was hailed as a landmark decision in a nation battling enormous human rights abuses and chronic violence.

But in a country where sexual relations outside marriage are taboo and homosexuality is illegal, transgender people are treated as sex objects and often become the victims of assault, ending up as little more than beggars.

Now Faqeer has given up dancing to focus on campaigning for the May 11 polls, telling AFP that the world of politics is more serious.

"My aim is to give justice to the poor, welfare to the old, promote meritocracy and the lives of cleaners and remove unemployment. Once elected, I will make my city cleaner and end the traffic chaos," she said in her office.

Born in 1975 as Essa Gul, the son of a radical prayer leader, she has overcome immense personal pain.

Her strict father kept his children at home to be taught only the Koran and she was bullied by her brothers for "girlish" tendencies.

After her father died, her brothers forced her out aged 15 and she was taken under the wing of a prominent member of the transgender community.

She changed her name, grew out her hair, dressed permanently as a woman and spent the next decade dancing and working as a prostitute. She became popular and earned good money, but her ambitions spread wider.

She invested in a textiles business and started supplying bed sheets and ladies clothes door to door, allowing her to make new contacts in the city.

Then she branched out into welfare, providing care to elderly eunuchs and registered her own charity in 2009.

Today, her two-room apartment serves as a home, an institute offering transgender people computer training and therefore the prospect of more respectable work, the headquarters of her charity and as a campaign hub.

"I decided to live for others, because everybody lives for themselves but nobody sacrifices their life for others," she said.

Having won the hearts of Sukkur's transgender community and hundreds of poor people, she says her community asked her to stand for election.

All the transgender candidates are running as independents, limiting their chances of success. Politics in Pakistan is based heavily on patronage, giving wealthy landlords and entrenched political parties a huge advantage.

In the eastern town of Gujrat close to the Indian border, Resham is taking on the impossible: going head to head with the outgoing deputy prime minister and a former defence minister for a seat in the national assembly.

"The main political parties have failed to lessen people's problems," she said, leaving her house to campaign against rising inflation and poverty.

"Women who are fed up with the political heavyweights -- who win elections from our area but don't do anything for the people -- asked me to defeat both of them," she said.

"I am pretty sure about beating them and getting more than 60,000 votes."

Her immediate neighbours are enthusiastic supporters, but others laugh when asked if they would vote for a transgender candidate.

"I can't take them as anything more than a joke. They can't win," says Muhammad Iqbal, a 40-year-old shopkeeper in Gujrat's fish market.

The candidate is unbowed.

"We won't dance while going out to seek votes. We want to give an impression of a decent campaign. We want people to believe that we are serious people and take politics seriously," Resham said.