Pakistani Politicians to Increase Their Budget on Health and Education 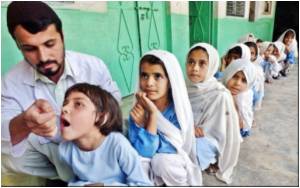 After the UN report that revealed a low health and education budget in the developing countries, Pakistani politicians promise to increase their budget on the same in a campaign trial.

The 2013 report ranked Pakistan 146 out of 187 countries on a human development index, equal to Bangladesh and just ahead of Angola and Myanmar.

"Pakistan has one of the lowest investments in terms of education and health -- it spends 0.8 percent of its GDP on health and 1.8 percent on education," the United Nations said in a statement.


It said 49 percent of the population live in poverty.

Senator Razina Alam of the opposition Pakistan Muslim League-N (PML-N), considered the frontrunner in May elections which will mark the country's first democratic transition, pledged to transform the education system.
Advertisement
"We will increase resources for education and at least four percent of GDP would be allocated by the year 2018," she said.

"In the health sector we will make a threefold increase in the budget by 2018," she added.

"The challenge of governance is a serious challenge in Pakistan as there is a lack of attention towards responding to peoples' problems," said Mehmood.

The party is contesting elections for the first time, seeking to oust the feudal and industrial elites grouped in the PML-N and the outgoing Pakistan People's Party (PPP), which have dominated governments for decades.

"If voted into power, we will increase both the health and education budget which will be five percent of GDP for each sector," said Farooq Sattar, a senior member of the Muttahida Qaumi Movement (MQM), which rules Karachi.

The PPP did not attend the launch of the report with other politicians, diplomats and aid workers. Organisers said its representative cancelled at the last minute.

According to its manifesto, the PPP increased the education budget by 196 percent to $78 million for 2012-13.

"In our next term we will propose an increase in state spending on health to five percent of consolidated government spending by the end of our next term," it said.