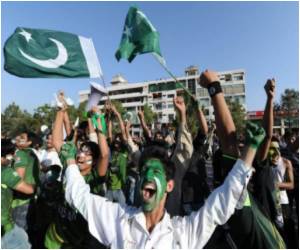 In a recent survey it was found that Pakistanis are happier about their lives than Indians and Americans.

The Happy Planet Index 2012 has ranked Pakistan 16th among 151 countries, ahead of both India and the U.S. which ranked 32nd and 105th respectively, reports The Dawn.

Are you leading a happy and fulfilling life? Test your happiness score using these 10 questions.
Advertisement

The Happy Planet Index is calculated using life expectancy, well-being and ecological footprint of the countries with data collected from various sources including UNDP and Gallup. The index was introduced in July 2006 by a British NGO, the New Economics Foundation, which also has a branch in the U.S.


The HPI 2012 ranked Costa Rica as the happiest country in the world, followed by Vietnam and Colombia.

The life expectancy and experienced well-being of Pakistan was found to be mediocre, but the ecological footprint was termed "good". The total HPI of Pakistan was calculated at 54.1.

Genetic Reason Behind Unhappiness in Men

Scientists have identified a gene that seems to make women happy, but does not work for men. They surmise that this might be the reason why women are often more cheerful than men.
Advertisement
Israel landed just one spot above Pakistan, with "good" life expectancy and well-being, but a "poor" ecological footprint.

Bangladesh was higher up on the scale at 11, with the first two factors termed mediocre and the footprint as "good".

The U.S. scored low because of its ecological footprint, which was worse than the "poor" category. The life expectancy and well-being were, however, ranked "good". Afghanistan was ranked 109.

The countries which landed at the bottom of the Happiness Index were mostly from Sub-Saharan Africa. (ANI)

Happiness gene discovered, but works only in women, states study.
Advertisement
<< Bicycle Helmets Shown To Be Effective
Eyejusters, Now Adjust Your Glasses Yourself >>

How Happiness Quotient Changes in a Lifetime