Pakistan is set to begin a three-day nationwide polio immunization campaign with the idea of eliminating the disease in 2016.

Thousands of teams have been formed for the drive against the crippling disease with hopes to eliminate the virus this year, official sources said.

According to a UNICEF health official, there was an at least 85 percent reduction in polio cases recorded in 2015 and with this kind of progress, Pakistan can be declared a non-epidemic country for polio virus this year, Dawn online reported.


‘Polio, caused by a virus (poliomyelitis, invades the nervous system and can cause irreversible paralysis in a matter of hours.’


In 2014, Pakistan recorded 305 polio cases. Around 292,000 children from Khyber Agency, North Waziristan and South Waziristan missed immunization in 2014 due to inaccessibility to these areas.

Polio vaccination has always remained a challenge for health officials in the country for they have to convince parents, who are sometimes reluctant because of their conservative views.

Special counters would be established at public parks, railway stations, bus and wagon stands, airports and transit points to administer anti-polio drops to children to ensure that no child is left without the vaccine.

WHO: Protect Yourself and Your Child With Vaccination
Celebrated annually in the last week of April, World Immunization Week promotes the use of vaccines to protect people of all ages against preventable diseases.
READ MORE 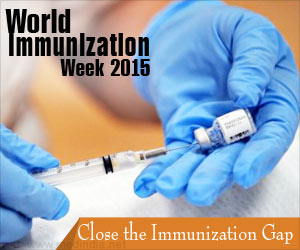 Vaccination During Pregnancy
Healthcare providers should counsel pregnant women about the benefits of receiving the recommended vaccines during pregnancy and also the potential risks it may pose to the developing fetus.
READ MORE