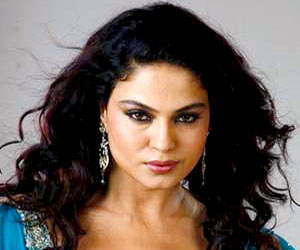 Veena Malik has been missing from her Mumbai home since Thursday.

The controversial Pakistani actress has received death threats from her home country after she allegedly posed nude for the cover of the Indian edition of men's magazine FHM.

Going naked is the latest yoga trend, and those who have done it can swear by its benefits.
Advertisement

However, she claimed that the magazine airbrushed out the thong she was wearing.


According to her business manager Prateek Mehta, the actress mysteriously went missing after she left from work in the early hours of morning.

"She was on the sets of the film in the morning and she shot all night yesterday," Mehta said.

Yoga calendars for 2011 are out and many of these feature dogs, cats, puppies, kittens, and nude women-men demonstrating various yoga asanas (postures).
Advertisement
"She left for home in the morning and since then her phone is not reachable. We don't know where she is. He phone is completely not reachable," he added.

He added that unlike most of the days, Malik did not take the vehicle provided to her to get dropped to her house. She went with an unknown person in his car.

Director Hemant Madurkar revealed that hours before she went missing, he received a message on his phone from her indicating that she was upset and depressed.

"From the last two days she was looking a little upset and could not give good shots during the shoot. Yesterday we packed up at around 5:30-6:00 am (local time)," Madurkar said.

"After we pack up from work, she messaged me saying that she was sorry for not able to perform well during the shoots as she was upset over something. I immediately tried calling her, but her phone was unreachable," he added.

Malik was reportedly shooting for a horror film named as '125 Kilometres' in Mumbai.