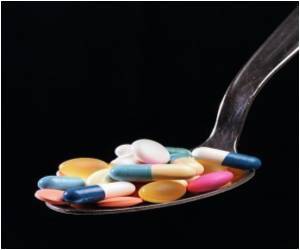 The risk of incidence of certain types of cancers goes down among those who regularly take non-steroidal anti-inflammatory drugs (NSAIDs) like aspirin.

The study reveals that Sulindac shuts down cancer cell growth and initiates cell death by binding to nuclear receptor RXRa, a protein that receives a signal and carries it into the nucleus to turn genes on or off.


"Nuclear receptors are excellent targets for drug development. Thirteen percent of existing drugs target nuclear receptors, even though the mechanism of action is not always clear," said Xiao-kun Zhang, professor at Sanford-Burnham and senior author of the study.
Advertisement
RXRa normally suppresses tumors, but many types of cancer cells produce a truncated form of this nuclear receptor that does just the opposite. This study showed that shortened RXRa enhances tumor growth by stimulating other proteins that help cancer cells survive.

Luckily, the researchers also found that Sulindac can be used to combat this deviant RXRa by switching off its pro-survival function and turning on apoptosis, a process that tells cells to self-destruct.

Sulindac is currently prescribed for the treatment of pain and fever, and to help relieve symptoms of arthritis. The current study demonstrates a new application for Sulindac as a potential anti-cancer treatment that targets truncated RXRa protein in tumors.

However, some NSAIDs have gotten a lot of bad press for their potentially dangerous cardiovascular side effects. To overcome this limitation, the researchers tweaked Sulindac, creating a new version of the drug - now called K-80003 - that both decreases negative consequences and increases binding to truncated RXRa.

"Depending on the conditions, the same protein, such as RXRa, can either kill cancer cells or promote their growth. The addition of K-80003 shifts that balance by blocking survival pathways and sensitizing cancer cells to triggers of apoptosis," Zhang said.

The study appears in Cancer Cell on June 15.