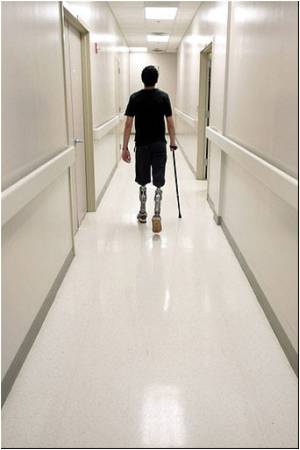 And also other mental-health problems up to 2 years post injury. In contrast, pain showed the most improvement 3-6 months after acute hospitalization, and then leveled off after 1 year. The investigative team, led by Rollin M. Gallagher, MD, MPH, reported results during a poster session at the 29th Annual Meeting of the American Academy of Pain Medicine.

"Our research confirms that chronic daily pain, including neuropathic pain, continues to be a burden for limb-injured servicemen, that post-traumatic stress is a far more prominent feature of recovery than in other chronic pain populations, and that returning to meaningful role functioning in their lives is challenging for many," said Dr. Gallagher, deputy national program director for pain management in the Department of Veterans Affairs and clinical professor of psychiatry and anesthesiology at the University of Pennsylvania and the Philadelphia VA Medical Center.


The researchers said surprisingly few studies have examined short- and long-term pain-related and behavioral-health outcomes in returning military personnel with major limb trauma.
Advertisement
"The difficulty lies in developing an effective methodology that not only enables investigators to classify in detail the nature and severity of injuries and to characterize psychosocial and initial treatment variables, but that also enables investigators to evaluate the longitudinal outcomes of wounded warriors as they seek to recover in geographically dispersed localities," Dr. Gallagher said.

Using a longitudinal study design, researchers conducted phone interviews with 277 combat-injured military service personnel every 3 months for 2 years, beginning after their initial hospitalization for acute care. Participants had sustained major injuries to extremities and were recruited from major military hospitals, primarily by on-site research staff. Initial evaluation and follow-up interviews were conducted at the Philadelphia VA Medical Center, adapting the training and methodology of the Behavioral Health Laboratory for telephone evaluation.

The BPI average and worst pain and the NPS items and subscales were significantly lower (P<0.05) post treatment compared with baseline with no significant statistical differences noted at time points beyond 6 months. Across various time points, 13.5% reported depression, 5% suicidal ideation and 13.9% generalized anxiety disorder. Nearly half of participants, 45.9%, reported a low level of PTSD, and an additional 11.7% reported a high level.

The results suggest that severely injured veterans will need ongoing biobehavioral pain and psychological care to help them cope with the pain and trauma of injury, Dr. Gallagher said. He called for a focus on occupational and vocational rehabilitation to help service members re-establish meaningful lives in their communities.

"Unlike animal models that demonstrate this construct, the course of recovery for injured warriors is fraught with physical, psychological and social uncertainty," he said. "Future analyses on a larger sample may reveal characteristics that predict better outcomes."

Source: Eurekalert
Advertisement
<< French Cheese Lovers in New York Take to the Streets Agains...
Gut Secrets Decoded With The Help Of A New Technique Based ... >>

Iraq War Veteran Finishes 2,012 Mile Walk for Charity
In Canary Wharf, London, a former soldier who was injured in a rocket attack in Iraq in 2008, has .....

American Veterans With Mild TBI Harbor Brain Abnormalities
A new study reveals that soldiers returning from Iraq and Afghanistan who have experienced mild ......

Meditation Could Help War Veterans
Meditation could help heal the post-war mental disturbances that afflict the soldiers, say US war .....