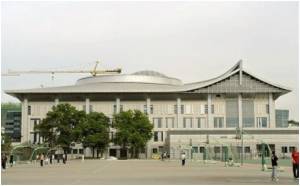 Veteran Chinese political activist He Depu was obliged to leave town -- for an all-expenses-paid holiday to the tropical island of Hainan, complete with police escorts, as top Communist leaders gathered in Beijing.

It is an unusual method of muzzling dissent, but He is one of dozens of campaigners who rights groups say have been forced on vacation -- sometimes featuring luxurious hotels beside sun-drenched beaches, trips to tourist sites and lavish dinners -- courtesy of the authorities.

It happens so often that dissidents have coined a phrase for it: "being travelled".


He, 57, had not been charged with any crime, but officers took him 2,300 kilometres (1,400 miles) to Hainan for 10 days to ensure he was not in the capital for this year's annual meeting of China's legislature, he said.
Advertisement
Two policemen accompanied him, his wife and another dissident for dips in the ocean and visits to a large Buddha statue, he said.

"We had a pretty good time, because a decent amount of money was spent on the trip, the local government paid for everything."

Altogether eight activists told AFP they had been forced on holiday in recent years.

"Every time there is an important national event I'm taken on vacation," said Xu Xiangyu, who has long campaigned against officials she accuses of demolishing her house without any compensation.

In 2011 police and court staff announced they and her family were going on a trip to Hainan -- a place of internal exile for criminals, disgraced officials and renegade poets as early as the Tang dynasty of 618-907.

She rifled through holiday snaps showing her posing at a seaside park, and with her chaperones around a table heaped with empty plates.

China's ruling Communist party keeps a tight grip on power, frequently detaining those who speak out against government abuses.

It has built a vast "stability maintenance" apparatus and President Xi Jinping has sought to further stifle dissent since his 2012 ascension to the top of the ruling party.

State-enforced travel spiked this year ahead of the 25th anniversary of the Tiananmen Square crackdown -- where the army killed hundreds of protesters -- on June 4.

According to US-based advocacy group Human Rights in China, 15 people were taken on forced vacations beforehand.

Police "went with me everyday, and paid for everything" on a trip to Ningxia in the northwest, including the towering dunes of the Tengger desert.

"If you refuse to go travelling, there will be consequences," he said. "You have to go. Even though you are at tourist sites, you have been forced to go, so you're not in the mood to enjoy it."

"We ate the best food, and drank the best alcohol. The security officials enjoyed it too. Not just any security official can go on this kind of trip, they need to be above a certain rank," said environmental campaigner Wu Lihong, adding he was taken to the ancient city of Xian for two weeks in March.

"Quite a few" officials from Beijing's secretive ministry of state security accompanied him, he said.

They stayed at Xian's "best hotel", he said, and saw the Unesco-listed Terracotta Warriors, as well as the "Wild Goose Pagoda", a Tang dynasty tower that hosts night-time laser shows.

"They are usually stuck inside using their computers and reading the papers, but by accompanying me they have a chance to travel and eat well," he added.

When Chinese citizens travel to Beijing seeking redress from higher authorities for local government abuses they risk detention in makeshift "black jails", where they are sometimes beaten before being sent home.

More persistent ones, though, are targeted for holidays.

"It's a form of illegal detention," she added. "This kind of forced travel depriving people of their freedom is unlawful."

China's foreign ministry often says that detained activists are treated according to the law. The public security ministry did not respond to a request for comment.

Wang Rongwen, a longtime petitioner from Sichuan in the southwest, had her third trip ahead of the Tiananmen anniversary, with six officials taking her to the majestic peaks and gurgling waterfalls of the Tiantai mountains.

During the Communist party's 2012 Congress she was brought to a hotel that boasts a chandeliered restaurant, marble-floored lobby and king-sized beds.

But she did not enjoy the experiences, she said.

"Being travelled is no better than being in a moving jail."

Hospital Admissions for the Most Severe Form of Heart Attacks Has Quadrupled in China Over the Last Decade
A new study reveals that the number of hospital admissions in China due to ST-segment elevation ......

Fake Sick Notes a Booming Business in Football-Mad China
The ongoing FIFA World Cup has seen the rise of a new business in China as people are selling fake ....