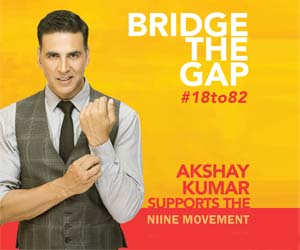 Menstruation is still a taboo in India. Run4Niine marathon will bring together both genders and across all ages to run, walk, jog and wheel across their cities, and help break the silence associated with menstruation and to join the Chain of Niine to tackle menstrual taboos. One of Bollywood's most popular megastars and India's very own 'Pad Man' Akshay Kumar will participate in the Lucknow leg of a nationwide Run4Niine marathon aimed at tackling menstrual taboos.

The marathon will be held in 500 cities across India on March 8 to mark International Women's Day.

Advertisement
‘One of Bollywood's most iconic megastars and India's very own 'Pad Man' Akshay Kumar will flag off Run4Niine marathon which will bring together both genders and across all ages to run, walk, jog and wheel across their cities, and help break the silence associated with menstruation and to join the Chain of Niine to tackle menstrual taboos.’
Read More..

Run4Niine is expanding its nationwide '#18to82' campaign, initiated by the Niine Movement, to bridge the gap between the 18 percent of menstruating females in India who use sanitary napkins, and the 82 percent predominantly engaging in unhygienic and unsafe alternatives such as old clothes, rags, hay, and even ash, read a statement.


"Pad Man" star and Niine Movement champion Akshay will flag off Run4Niine here. In addition to starting this unique nationwide campaign, Akshay will also be a part of a special event where guests will be entertained and inspired to talk about the importance of menstrual hygiene awareness.
Advertisement
Akshay said: "When I made the movie 'Pad Man,' I was hoping for it to turn into a conversation. But today, after a year, I can proudly say that it has grown to become a phenomenal movement, truly at a grassroots level.

"I am therefore excited to announce my partnership with the Niine Movement to take this to the streets of India and invite my fellow citizens, compatriots, change makers and pathbreakers to join me for Run4Niine, to raise awareness and initiate action on menstrual hygiene. Each of us, when joined together, will form a chain - an unstoppable force fighting an improbable stigma."

On the significance of the event taking place to mark International Women's Day, Akshay said: "It is a significant day for women and girls across the world, a day when not only women are celebrated for their achievements and contributions in all sectors of life but a cold reminder of the inequalities that exist in our society which have kept girls and women back for centuries."

As an inclusive initiative, Run4Niine will bring together both genders, across all ages, backgrounds and of all abilities - to run, walk, jog and wheel across their cities, and help break the silence associated with menstruation and to join the Chain of Niine.

Run4Niine partner Junior Chambers International (JCI), the non-profit organization encouraging young people to be active, responsible citizens, will help take the Let's Talk About Periods' message to the streets of India and in up to 500 cities, made possible through JCI's chapter networks.

The Federation of Obstetric and Gynaecological Societies of India (FOGSI) will be holding workshops in each of the 500 cities where Run4Niine activities will be taking place. The Niine Movement and Niine Sanitary Napkins, the made-in-India, affordable yet premium sanitary napkins brand were co-founded by leading Gorakhpur social-entrepreneurs, Amar Tulsiyan, and Gaurav Bathwal and Kanpur entrepreneur Sharat Khemka.