Pack Walk for Unwanted Pooches Being Led by 'Dog Whisperer' 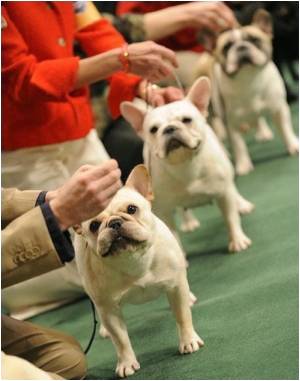 In order to raise awareness of the plight of unwanted canines, a man called the Dog Whisperer led hundreds of Washington dog lovers and their four-legged friends on a "pack walk".

"You're a rock star, Cesar!" shouted one fan as Cesar Millan, the one-time illegal immigrant from Mexico who is the best-known dog trainer on television, kicked off his second annual National Family Pack Walk in the National Mall.

Seen in more than 100 countries, "The Dog Whisperer" features Millan working his magic on dogs with all sorts of behavioral issues -- or, more to the point, educating their owners how to turn become calm but assertive "pack leaders."


The pack walk, however, is geared more towards bringing public attention to the rehabilitation and adoption of unwanted dogs -- a cause, Millan said, that could do with some legislative help.
Advertisement
"It's about people coming together to create awareness," Millan, 43, told AFP prior to the walk that attracted a wide variety of dogs, both purebred and mongrels, including a few dressed up in tutus and Batman capes.

"We want politicians to care and understand that there's a law to be made about animal rights."

Millan added: "The greatness of a nation and its moral progress can be measured in the way animals are treated -- that's Gandhi. We would like for America, and the world, to embrace that quote."

Americans own 78.2 million dogs, but several million wind up in animal shelters every year, and a large number of those are put down, according to the American Society for the Prevention of Cruelty to Animals (ASPCA).

Earlier this year an HBO television documentary, "One Nation Under Dog," featured harrowing video of unwanted dogs being put into a makeshift gas chamber, piled one on top of the other, crying with agony as they died.

Millan, like many dog lovers, opposes euthanasia for unwanted dogs, insisting that even the most aggressive dogs can become good pets with the correct mix of "exercise, discipline and affection," in that order.

On Saturday, the dogs on the Mall -- the vast stretch of lawn that runs from the Capitol to Lincoln Memorial -- were astonishingly well-behaved.

Few barked, and none required the discipline techniques that Millan picked from his grandfather -- techniques that many participants had already picked up from faithfully watching his television show.

"The point of loving dogs is not just American," Millan said.

"I have the fortune to travel around the world, and people make the same assumption that a dog only requires affection. I'm a big believer that a dog requires exercise, discipline and affection."

Walking for Fitness and Weight Loss
News Archive
News Resource
News Category
Five Love Languages Every Couple Should Know Go for a Walk to Speed Up Your Brain Function 5 Types of Tea Women Should Drink Daily Bodychecking Experience Does Not Protect Teen Hockey Players from Injury Yoga: A Powerful Weapon to Fight COVID-19
More News
Sign up for Wellness Consult a Doctor Sign up for Selfcare

More News on:
Walking for Fitness and Weight Loss Walking As An Exercise