Pacific Nations Ranked As Fattest In the World 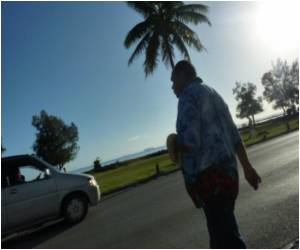 People in Pacific region have replaced their traditional diet of fish and coconuts for corned beef which has contributed to an obesity epidemic thereby ranking them as the fattest in the world.

Meat in Tonga almost invariably comes in a tin, whether it be turkey breast, meat loaf, luncheon meat or Spam, which can be bought in a variety of forms including smoked, with chilli or laced with cheese for an extra calorie hit.


"This is the biggest issue facing Tonga," he told AFP, citing soaring levels of weight-related coronary disease, diabetes and strokes among islanders.

With more than one billion people affected, diabesity is the largest epidemic in the world today. Fortunately it can be reversed with lifestyle changes.
Advertisement
"Every other day there's a funeral, a next-door neighbour, a relative, a friend. It's always heart disease, diabetes, it's ridiculous."

The Tongan Health Department says more than 90 percent of the total population is classed as overweight and more than 60 percent is obese.

According to World Health Organisation (WHO) data released last year, Pacific island nations account for eight of the top 10 countries where the male population is overweight or obese.

Weight-related diseases are responsible for three-quarters of deaths in the region, Fiji-based WHO nutritionist Temo Waqanivalu said, with diabetes rates in some Pacific nations close to 50 percent.

"It's a problem that health systems are struggling to deal with," he said.

"If you walk into a hospital in any of the Pacific countries, about 75-80 percent of the surgeries are the result of non-communicable diseases linked to obesity."

Experts say economic, cultural and lifestyle factors have combined to make the obesity epidemic, which is an increasing problem across the globe, more acute in the Pacific.

"In my young days we would walk everywhere and go swimming," he said. "Now people use the car to go just a little way down the street."

Traditional diets based around fish and root crops have also fallen out of favour, replaced with fatty foods imported from Western nations that islanders see as more convenient and prestigious.

"They are unable to compete with the glamour and flashiness of imported foods," Waqanivalu said, adding that cash-strapped consumers in the Pacific often had little choice about making poor dietary choices.

"In some countries it's cheaper to buy a fizzy drink than a bottle of water.

"When they go down the aisle of the supermarket, probably the last thing people are looking at is the nutritional information, they're looking at the price."

Pacific islanders sometimes argue that they naturally have big frames and are more prone to put on weight than other people, although it's a theory Waqanivalu rejects.

He said a generous girth had long been seen as a sign of status in the Pacific but the message was slowly getting out that bigger is not necessarily better.

"We're telling people that being large is OK but being fat is different and that's what we're beginning to see," he said.

Tonga's late King Tupou IV, who died in 2006, helped raise awareness about obesity in the 1990s, when he organised a national diet and exercise routine after receiving warnings from his doctors about his weight.

Listed by the Guinness Book of Records as the heaviest monarch in the world at almost 210 kilograms (463 pounds), he reportedly lost 70 kilograms.

But Tonga's current Prime Minister Lord Tu'ivakano said more needed to be done to combat the obesity problem and his government would look at restricting imports such as mutton flaps -- cheap, fatty sheep offcuts popular in the country.

"We have to go back to the old ways, just eating good food -- taros, kumaras (sweet potatoes), yams," he said

"It's a matter of saying 'sorry, you have to find an alternative', probably eat fish rather than mutton flaps."

The BMI calculator helps you assess your weight indicating if it is normal or if you are underweight or overweight, based on your height.
Advertisement
<< Change in PSA Level May Not Help Predict Prostate Cancer
Monkeys Provide Malaria Reservoir for Human Disease in Sout... >>

Pregnancy Confirmation Calculator How to Reduce School Bag Weight - Simple Tips Find a Hospital Sanatogen Color Blindness Calculator Post-Nasal Drip Noscaphene (Noscapine) Indian Medical Journals A-Z Drug Brands in India Drug Side Effects Calculator
This site uses cookies to deliver our services. By using our site, you acknowledge that you have read and understand our Cookie Policy, Privacy Policy, and our Terms of Use