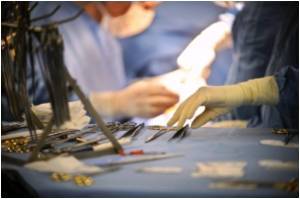 An Oz woman will be the recepient of the world's first bionic leg.

Marny Cringle, who lost her leg after falling beneath a train on the London Tube in December 1996, has been chosen for a remarkable bionic leg that will fuse on to living muscles and bones to become a natural extension of her body.

A bionic leg that uses a knee joint with the same motion sensing technology as the Nintendo Wii and Apple iPad has been fitted onto a NY man.
Advertisement

The remaining stump was initially too short to fit a prosthesis and despite years of consulting with specialists the 42-year-old was forced to put up with life on crutches and in a wheelchair.


However, recent cutting-edge surgery and months of painful treatment have managed to lengthen the bone by 5cm in preparation for the artificial limb.

4-year old girl who had lost both her legs to meningitis has started walking again using a new bionic leg prosthetic system.
Advertisement
The next step is for surgeons at the Macquarie University Hospital in Sydney to anchor the top part of the bionic leg into her femur, where muscle and bone will gradually grow around it.

It will be the first time someone has successfully had both a bone stump lengthened and a bionic limb fitted but for Cringle it is much more than that.

"Just to be able to walk with two hands free is something I'm really looking forward to," the Daily Telegraph quoted her as saying.

"And to be able to cuddle someone without having to have crutches hanging off me - it's those minor things," she said.

Orthopaedic surgeon Munjed Al Muderis, who will head the operation on Cringle, described the procedure as "the future for amputee patients worldwide".

Cringle, a former Australian wheelchair tennis champion, will undergo her next round of surgery on February 22, with recovery expected to take 6 to 8 weeks.

"I've beaten the odds with growing the bone as much as it has and so I know it is going to happen now.

Paraplegics can Move Around Now - With Bionic Legs

Sinopril (2mg) (Lacidipine) Noscaphene (Noscapine) Find a Doctor Vent Forte (Theophylline) Find a Hospital Hearing Loss Calculator Iron Intake Calculator How to Reduce School Bag Weight - Simple Tips Daily Calorie Requirements Sanatogen
This site uses cookies to deliver our services.By using our site, you acknowledge that you have read and understand our Cookie Policy, Privacy Policy, and our Terms of Use  Ok, Got it. Close
×