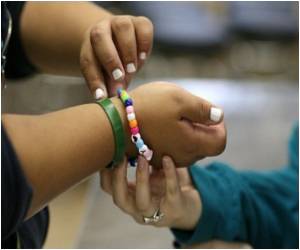 A new study has revealed that overweight teenagers already struggling with risk factors such as insulin resistance may need to add weak bones to their list of health concerns.

A study of 143 overweight 14-18 year olds showed those with risk factors such as the precursor for diabetes and low levels of the blood-vessel protecting HDL cholesterol have less bone mass - an indicator of bone strength - than their overweight but otherwise healthy peers, according to researchers at Georgia Health Sciences University's Georgia Prevention Institute.

Other risk factors included high fat levels in the blood, higher blood pressure and a larger waist size, said Dr. Norman Pollock, GHSU bone biologist and corresponding author of the study. In fact, total body fat didn't seem to impact bone mass: it was fat around the middle, or visceral fat, that seemed to increase the risk for bad bones just like it does the risk of diabetes and heart disease.


"The more risk factors you have, the less bone mass you have," Pollock said, noting that 62 percent of the overweight adolescents had at least one risk factor. It also indicates that the concept of "fit and fat" may apply to the bones.

A fracture is a condition where the continuity of the bone is lost. Majority of bone fractures occur because of high force impact or stress on a bone.
Advertisement
Study participants without one or more of these risk factors tended to get slightly more vigorous physical activity although none of the participants got the recommended 60-plus minutes of daily physical activity, Pollock said. Interestingly daily caloric intake for all study participants was in the optimal range.

"This says to kids and their parents that restricting calories is not the answer; we need to focus more on increasing vigorous physical activity," Pollock said. Vigorous activity is defined as activity that increases the heart rate high enough to cause heavy breathing, such as jogging, tennis or jumping jacks. Studies have shown that physical activity prompts bones to release a hormone called osteocalcin, which helps decrease fat-related risk factors such as insulin resistance.

"We are now beginning to respect the bones as an endocrine organ like we do now with fat and muscle," Pollock noted. Activity also increases the number of bone-producing cells called osteoblasts.

The study is published in The Journal of Pediatrics.

Osteoporosis is a bone disease that leads to an increased risk of fractures. The bone mass is reduced and the bones are porous, thereby resulting in weakness of the skeletal system of the body.
Advertisement
<< Resveratrol Effective In Reducing Body Fat: Study
Rare Robotic Surgery Performed at Chettinad Health City in ... >>

Blood Donation - Recipients Pregnancy Confirmation Calculator A-Z Drug Brands in India How to Reduce School Bag Weight - Simple Tips The Essence of Yoga Noscaphene (Noscapine) Color Blindness Calculator Drug Side Effects Calculator Selfie Addiction Calculator Diaphragmatic Hernia
This site uses cookies to deliver our services.By using our site, you acknowledge that you have read and understand our Cookie Policy, Privacy Policy, and our Terms of Use  Ok, Got it. Close
×